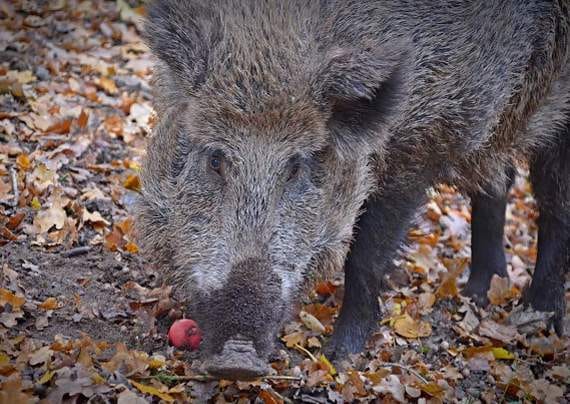 More wild boar could be in the firing line.

THe potential slaughter of more than 800 wild boar as part of an annual cull will turn the Forest into a “killing field”, it is claimed.

Forestry England (FE) is considering nearly doubling the cull from 450 animals to 850.

And Animal Aid charity member Joyce Moss, who met with Forestry England’s deputy surveyor of the Forest of Dean, Kevin Stannard, in May, said: “It is alarming to hear that the Forestry Commission (FE) still considers boar out of control in the Forest.

“Mr Stannard said he believed the boar population to be about 1,600 and that it would be necessary to increase the cull this winter from about 450 to about 850.

“DEFRA (Department of Environment, Food and Rural Affairs) has allowed him to increase his rangers from six to eight to accomplish this goal.

“This increase is so startling it will reduce the Forest to a brutal killing field for wildlife.

FE say they carry out thermal imaging and distance sampling surveys of the wild boar every Spring to get an estmate of the Forest population.

The 2018-19 population figure was 1,635 boar, with 450 being culled. Now Mrs Moss believes the cull will significantly increase again.

An FE spokesman said: “We are working to stop growth of the feral wild boar population on land we manage in the Forest of Dean. Our aim is to then bring the population down to the target figure of 400 boar.

“This target was set in recognition that we need a population high enough to provide genetic diversity, that the population remains healthy and for the environment to benefit from some the ecological benefits.

“Yet it (the population) must be small enough so they (the boar) do not pose a threat to species that are already at risk, to reduce the impacts on the residents of the Forest of Dean and to reduce the disease risk that high populations bring.”

But Mrs Moss said Animal Aid’s main objection to the cull of the boar is that ‘it is ineffective’.

“Boar will re-populate the depleted areas and, with shooting, will go into reproductive overdrive to do this,” she said.

“Culling is clearly not effective in the Forest and causes the boar to spread to other areas outside the killing zone.

“So the Forestry Commission goes on with its old fashioned and crude shooting methods.

“Culling is not the way forward and certainly not at the rate posited for this winter (if confirmed by the usual survey).”

But the spokesman added: “We would like to remind people they should not feed boar. They have plenty of food available in the Forest, feeding them is not only bad for their health, it can also increase the spread of disease.

“It encourages them to return to repeatedly turn over grasslands in search of the food source they remember, becoming a nuisance to residents and becoming too confident and unafraid of people.”