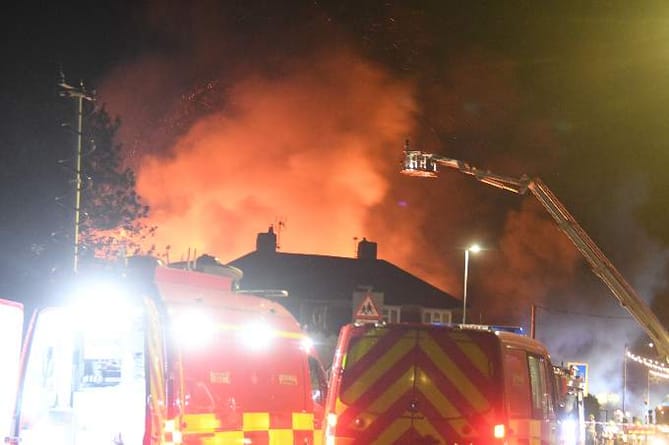 Firefighters tackle a fire in Chepstow.

FIREFIGHTERS have been tackling a blaze at a former social club in Chepstow tonight (Wednesday, December 1).

Witnesses at the scene on Bulwark Road told the Review that fire engines arrived at the Severn Bridge Social Club at about 6pm tonight.

The South Wales Fire Service established a 200-metre exclusion zone around the club, which is at the entrance to the Bulwark Industrial Estate.

Neighbours and nearby shops were evacuated with one couple telling the Review they had been told to leave their home because of the presence of potentially explosive materials at the site.

A water jet was used to direct hundreds of gallons of water at the fire and water bowser also arrived on the scene at about 9pm.

Fire engines from as far away as Caerphilly were on the scene to assist in bringing the blaze under control.

The club was opened in the mid-1960s as Bulwark expanded to house the families of steelworkers at Llanwern Steelworks in Newport.

The club closed more than a year ago and has been the target of vandals.

See the Review on Friday (December 3) for the full story.