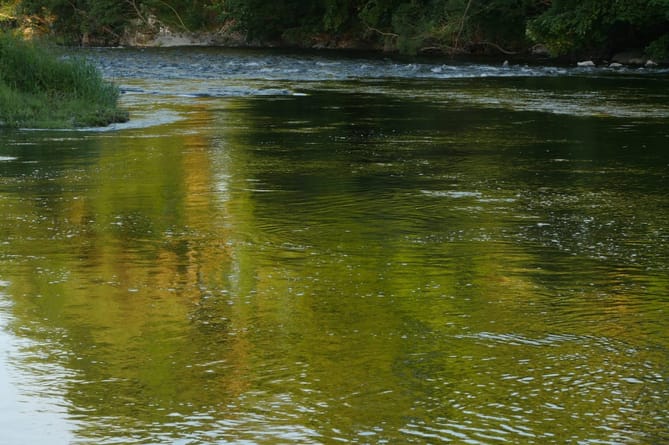 ’ACTIONS must follow words’ to reduce pollution in the River Wye before it is too late, councillors have warned.

Concern about pollution in the Wye, which runs through Monmouthshire, Herefordshire and Gloucestershire, has been mounting, with a month-long campaign recently culminating in a protest outside the Senedd.

A Natural Resources Wales (NRW) study found more than 60 per cent of the Wye and its catchments fail against targets for phosphate levels.

Phosphorus pollution causes excessive growth of algae, which smothers and blocks out light for other aquatic plants and animals.

Members of the Wye Valley AONB Joint Advisory Committee - which includes councillors from Monmouthshire, Herefordshire, Forest of Dean and Gloucestershire councils - voiced concern over the issue at a meeting on Monday.

Cllr Yolande Watson said the committee should write a letter to the agencies and councils involved to ensure "actions follow words".

Cllr Watson said the river is "an icon for local people, for tourists and for visitors".

"In New Zealand I would be putting forward legislation to make it a person - which has been done in New Zealand - to give it the same rights as a human being, because if it was it would be on a life support machine, having been poisoned with 15 years of legacy phosphates in its veins," she said.

Cllr Chris McFarling said "a sense of urgency" was needed over the issue.

He said it was important to monitor pollution in the river, as well as interventions being taken to understand their effectiveness.

"I am frightened for the future of our wildlife and our AONB," he said.

"If the River Wye dies then it really is a sad indictment of the way we have managed it, or not managed it."

Campaign groups have linked the high phosphate levels with run-off from poultry farms.

NRW has said phosphate pollution can occur from various sources.

Matthew Price, of the National Farmers’ Union, said the Environment Agency has written to all commercial poultry units in the catchment area on the English side of the Wye, to ensure regulations are followed.

Mr Price said it is accepted some of the phosphates in the Wye are of "agricultural origin", but he said it is "a complex issue".

"Agriculture has to come to the table which I think it is doing," Mr Price said.

"This is very high on lots of agendas."