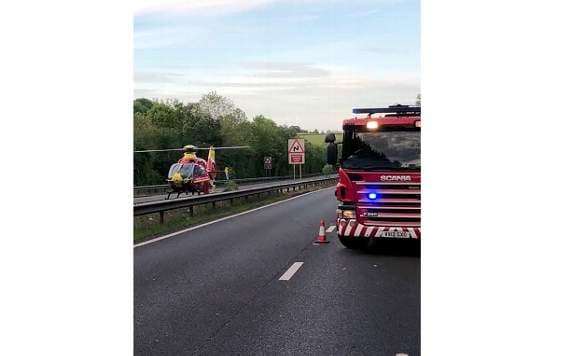 The air ambulance landed on the A40 to take the biker to hospital.

NEW calls have been made for a 50mph speed limit on an accident blackspot stretch of dual carriageway, after the third serious crash in seven months.

A motorcyclist in his 60s had to be airlifted to hospital after the latest accident on the A40 westbound carriageway at Whitchurch near Symonds Yat, which follows the deaths of a biker and a pedestrian last September and a 70-year-old car passenger at the end of March.

People took to social media to praise the Strensham-based air ambulance crew, who landed on the carriagway shortly after 7pm on Wednesday, May 22, to take the latest casualty to Southmead Hospital in Bristol.

“Personally I think the 50mph speed limit should be applied through this stretch of dual. Hopefully people will agree.”

Another said it was time to raise a petition about the situation.

A spokesman for the ambulance service said: “Crews arrived to find a motorcyclist, a man, who had collided with a barrier.

“Upon assessment, ambulance staff found he had sustained serious injuries and the team administered trauma care on scene.

“Once stable the man was airlifted to Southmead Hospital in Bristol for further emergency care.”

West Mercia Police said the motorcyclist, from Bristol, suffered a leg injury which is not believed to be life-threatening.

Inspector Jamie Francis said: “A man riding a motorbike was involved in a single vehicle collision in which he has received multiple minor injuries including and a leg injury. He was transported to hospital by the air ambulance, and is believed to be in a stable condition.

“If anyone witnessed the incident on the A40 yesterday at around 7.08pm we would like to hear from you.

“We are particularly keen to see dashcam footage of the motorbike travelling prior to and during the moments of the collision to establish what has occurred.”