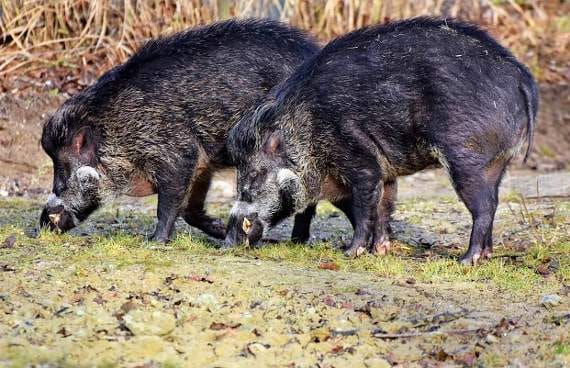 THE upward growth in wild boar numbers has been halted and should be at the target level of 400 within two years, says Forestry England’s most senior official in the Dean.

The latest estimate puts the number of boar on the public forest estate at 1,172 compared with 1,635 last year, Deputy Surveyor Kevin Stannard.

He told Forest councillors: “On the face of it that represents a significant reduction, but when you start looking into the details of the statistics, I think it is safer to say that all we’ve achieved at the moment is that we’ve stopped the upward trajectory of the population growth.

“It is now holding steady and now we are in a position to start pushing those numbers back down towards the long-term target of 400 boar in the Forest.”

The number of wildlife rangers engaged on the cull of boar has been doubled from four to eight, he told the council overview and scrutiny committee.

He said: “That is an additional resource just to give a fighting chance to get it down to 400.

“Once we’ve got to 400 we will reassess how many wildlife rangers we need on a permanent basis to keep that level there.”

The thermal imaging survey carried out by Forestry England has also shown boar moving to the edge of the Forest.

He said: “The density of boar has been higher in previous years in the core of the forest and lower along the periphery of the Forest.

“This year’s thermal imaging survey shows a much more even spread.

“You could interpret that as they are more habituated to the community fringe, but I think it also shows they are pushing much more widely onto private farmland, so the core has effectively expanded to the whole of the forest and the periphery is now the private farmland on the edge.

“And that is indicated by the number of farmers that are experiencing issues with wild boar, which has increased.”

Cllr Richard Boyles (Con, Newnham) asked whether the boar would be attracted back into the woodland as numbers decreased.

Mr Stannard said: “The truth of the matter is we don’t know, and that is one of the reasons we’ve got to keep on doing the thermal imaging survey year on year, and why communication with the outer ring of farmers is so important.

“There are two schools of thought. If we increase the culling pressure in the centre, it is likely to push the boar out onto the periphery.

“If that culling pressure is not matched on the periphery, they are likely to stay there as the food is there and they are not likely to get culled.

“There is also another school of thought which says that as the density drops in the forest, then we will start absorbing that outer population back in.

“The truth of the matter is we don’t know until we do it because there is no population model that adequately covers the whole of the Forest and periphery.”

Mr Stannard said they would also be launching another education campaign to discourage people from feeding the boar.

He said: “It is illegal to feed wild boar scraps of food that have been through a commercial or domestic kitchen.

“We are still seeing evidence of food for deliberate feeding of wild boar, so we are working with partners including officers from this council, Gloucestershire County Council, and we are looking to work with police, to have a communications exercise this autumn to get that message out there that feeding the boar is not necessary for the boars’ health, there is plenty of natural food out there.

“It is illegal because it significantly increases the risk of wild boar picking up foot and mouth disease or the one that has people more concerned, African Swine Fever.”