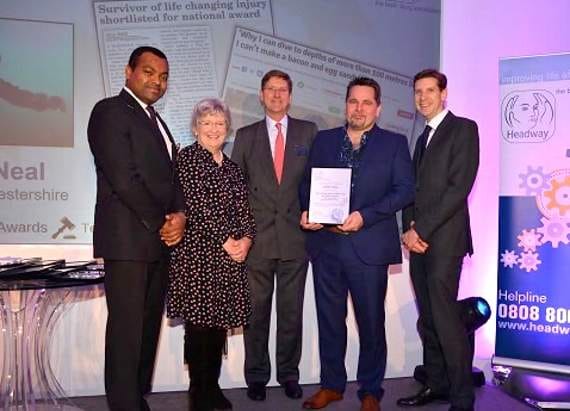 A DIVER who has fought back from a devastating brain injury to excel in the sport has scooped a top honour at a national awards ceremony.

James Neal from Symonds Yat received the runner-up prize in the Headway brain injury association’s Alex Richardson Achiever of the Year Award, after organising an £8,000 charity scubathon for the charity.

James, 49, suffered a bleed on the brain just before Christmas 2013 and was rushed to Frenchay Hospital in Bristol.

The injury changed his personality and turned his life upside down, but his passion to scuba dive again has helped him turn his fortunes around.

“When I found out I was a finalist I was lost for words,” said James. “To hear that I have inspired other people is just seriously cool.”

Wife Dimple Neal revealed: “After the bleed, James quickly became angry, having outbursts that I thought would end our marriage.

“The dynamics of our relationship had completely changed and we were struggling.”

James was left with short-term memory loss, had difficulty thinking logically, making decisions and being rational, but scuba diving at Cheltenham Sub-Aqua Club has helped him take a huge step back in his recovery.

Although James lost many of his life skills as a result of his brain injury, including “making an egg and bacon sandwich”, his knowledge of diving was still there.

“Diving is my identity. If I couldn’t dive I don’t know who I would be. It was my passion that pulled me through,” he admitted.

“All of my worries and concerns disappear as my head drops below the surface,” he said. “I basically go into autopilot.

“As a result of my injury, I can only fo- cus on one thing at a time. When I’m diving I focus on that and everything else is gone.

“On dry land there are always too many things going on at once and I can’t focus on doing anything.

“I’m qualified to dive to depths of 100 metres plus, carrying multiple cylinders, breathing gases that would be deadly if inhaled at the wrong depths. But I can’t make a bacon and egg sandwich without ruining it, it makes no sense.”

James is now among the top one per cent of divers, with no limit to the depths he can dive to.

He is also an elite diving instructor and has found a sense of purpose through helping others to better themselves in the sport that means so much to him.

In September 2017, James organised a 24-hour scubathon with fellow divers to raise awareness of brain injury.

The event was mon- ths in the planning, a challenge in itself for a brain injury survivor.

James poured his heart and soul into the event, which went off without a hitch, and raised £8,000 for Headway Gloucestershire.