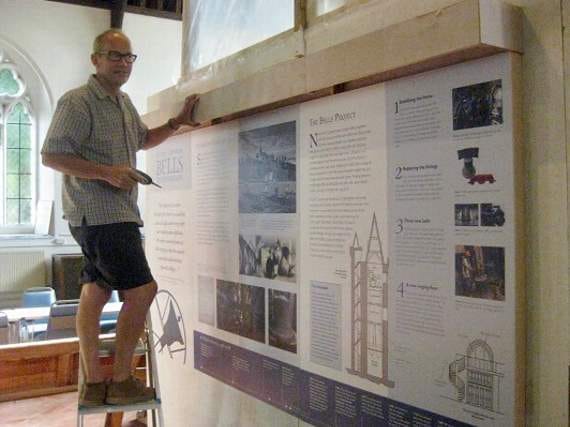 An exhibition on Newnham’s bells has been put together by Paul Manning.

HE might not have turned back the sea, but turn back the pages of history exactly 1,000 years ago, and King Canute was doing a good turn by creating a church parish which is about to see a major restoration project come to fruition.

The team behind the bells renovation at St Peter’s Church in Newnham has discovered from church documents that Canute was responsible for the first vicar of Newnham in 1018, exactly a millennium ago, who was paid the princely sum of 24 shillings a year.

St Peter’s Bells Restoration Committee spokesman Andy Vivian said: “When Canute gave the manor of Newnham to the monks of Pershore Abbey he made it a condition that the monks provide a priest for the village.

“His appointment was in 1018, meaning that this year 2018 is the millennium of the ecclesiastical parish of Newnham.

“This overlooked anniversary came to light as Paul Manning, a Newnham-based designer, was creating an exhibition about the bells restoration project to go into the church.”

However, plans to combine the rededication of the bells with a millennium service have been hit by “an unforeseen problem” with the casting of the new treble (top) bell at a foundry in Holland.

“In the casting of any bell there is always a chance that the result is not perfect,” said Andy. “The Royal Eijsbouts Foundry near Eindhoven was tasked with casting three replacement bells for us and the other two came out well.

“The foundry is now recasting the treble and later this week all three bells should be on their way to Bridport, in Dorset, home of Nicholson Engineering, our appointed bell hangers.

“The cleaning and recoating of our bell frame and all the bell hammers is complete, and Nicholson’s staff will be reassembling the frame at the works ready to carry out a stability test once the full set of eight bells is available.

“But it could be as late as the middle of November before they can begin reinstalling the bells, four weeks later than originally planned and that would take the finish date to the middle of December. Given the proximity to Christmas, the rededication service may now need to take place in the New Year.”

The eight bells haven’t been rung for 25 years because the bell fittings were damaged and worn, the cast iron bell frame corroded and unstable, and the belfry floor rotten.

An appeal to restore them has so far raised £155,000, and volunteers helped take them down in July for the first time in 124 years.

Work is still continuing inside the church, where Fieldhouse Builders of Blakeney are installing a raised ringing floor in the tower.

“Access to the new floor will be via a minstrels’ gallery at the back of the nave,” added Andy.

“And to mark the 1000th anniversary of the parish, we’ve decided to put an inscription along the glass screen that will form the interior wall of the new floor which will read ‘Celebrating 1000 years of Newnham Parish, 1018-2018’.”

The new free exhibition in the church focusses on Newnham’s bells’ heritage, which stretches back to at least the early 1600s, including the mechanical carillon which plays a different tune each day of the week.

It has a timeline showing key milestones in the history of the church and its bells, plus a section on the art of bell ringing, including a model bell made by Steve Bowles.

To learn more about the project, you can read the latest St Peter’s Bells Restoration Committee newsletter which is being delivered to households in the parish and is online at newnhambells.wordpress.com.

Sponsors of the appeal fund include the Heritage Lottery Fund, the Gloucester and Bristol Diocesan Association of Church Bell Ringers, Gloucestershire Environmental Trust, Gloucestershire Historic Churches Trust, Garfield Weston Foundation, the Ironmongers Company and the family of the late Rev Barry and Eileen Trotter. A third of the sum has come from residents and friends