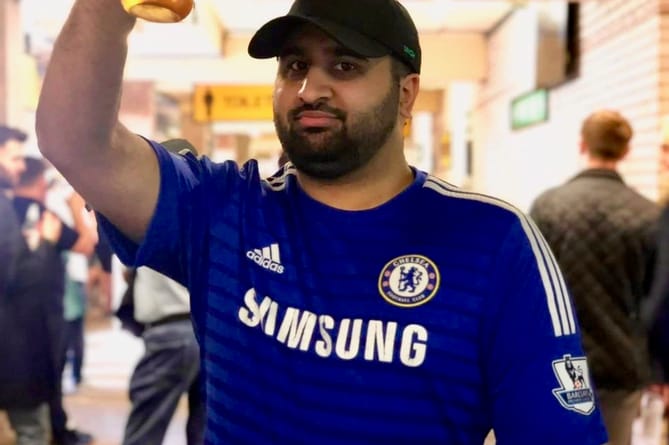 A SHOP owner and Chelsea football fan was honoured with a minute’s applause at a Premier League game, 13 days after being hit by a train at a London tube station.

An appeal launched in the former Monmouth Comprehensive School pupil’s memory has already raised more than £6,500 for the Papyrus Prevention of Young Suicide mental health charity.

The Forester’s devastated family said they didn’t know he had driven to London in his Audi on the day of the West Ham match, and were alerted to his tragic death by police later that night.

An inquest opened in London on May 5 heard that Kyle, one of three brothers, suffered multiple injuries, although it has not yet officially determined the cause of death.

His uncle Kalveer Heer said while launching the JustGiving fundraiser: “Kyle was a loveable gentle giant of a young man with everything in life to look forward to, but for Kyle this wasn’t the case.

“Kyle had made a really hard decision to stop the suffering and pain he was experiencing by ending his own life.

“For everyone that knows Kyle (friends and family) he will be remembered as the caring son… the silly brother… the funny mate… the Forester.

“I know that we all wish that our love would have been enough to keep him here with us, but sadly the problems Kyle struggled with prevented him from seeing how worthy he was of all our love.

“I won’t dwell on the darkness he dealt with at the end of his life. Instead, I’d like us all to remember all the ways he brought light into so many lives, and by creating this JustGiving page we could help someone else to find that light.”

Mr Heer told My London: “He had a proper Forester accent, he was born and raised in the Forest of Dean and he had a really funny accent, it would always crack us up when we saw him.

“He had all his friends down there and he loved it, he didn’t mind being a Forester. His humour was very dry, he was witty, just a very down to earth guy.

“Chelsea was his passion, he enjoyed cheeky drinks on a Friday out in Cardiff or Chepstow or wherever him and his mates used to go out. He was just an all-round good guy.”

The passionate Blues fan left his home without revealing where he was going on April 24, and it is thought he went to London to try and buy a last-minute ticket or to watch the game in a local pub.

But tragically, he lost his life sometime after 5pm at the station.

The Twitter campaign for a minute’s applause in the 23rd minute during Saturday’s game was launched by close friend Matthew Hatton, and retweeted by thousands.

And backed by the likes of former England star John Terry, author Mark Worrall and the Chelsea Supporters Trust, the tribute happened during the 2-2 draw with Wolves at Stamford Bridge, with his uncle later posting a video of the applause on Twitter.

Mr Heer said of the fundraising appeal: “I just hope that this money will go to train the people working for the charity, so that they’re trained to provide the service and advice for people in need.”

To support the fundraiser in memory of Kyle, go to www.justgiving.com/fundraising/kylesekhon