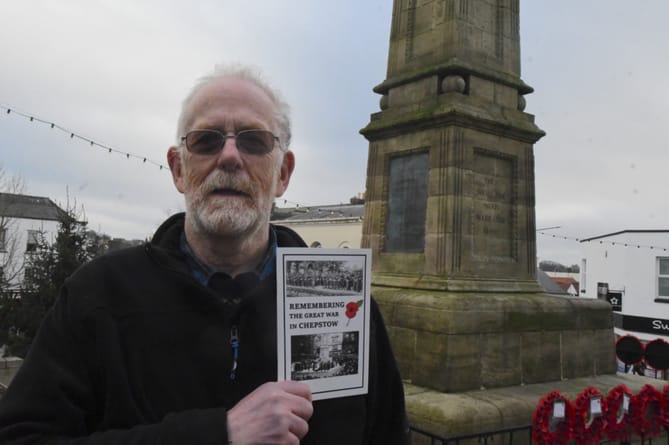 A NEW book tells the stories of the men from the First World War named on the war memorial in the centre of Chepstow.

The Chepstow Society published the booklet Remembering the Great War in Chepstow ahead of the 100th anniversary of the dedication of the three war memorials in the town last weekend.

The book was researched and written by society secretary Guy Hamilton.

He said: "Some were born locally and others lived here later, but all served their country with honour and gave their lives in the terrible conflict.

"Many - but by no means all - were members of the 1st Monmouthshire Regiment, who were recruited in the town, and fought in the trenches in Belgium and northern France.

"Others - like Able Seaman William Williams, who won the Victoria Cross for his heroic actions at Gallipoli - served elsewhere.

"A few are buried in Chepstow, but many more lie in other parts of the world - many in unmarked ground, but never forgotten.’’

The new booklet, also tells the story of what lay behind the building of the war memorial in Beaufort Square.

It also explains why there is a naval gun in the centre of Chepstow, given by the government to recognise the sacrifices of the town - which was the home, at the time, of a nationally important shipyard.

The cover features pictures of men of 1 Monmouthshires leaving Chepstow on their way to the front and of the dedication of the war memorial in 1922.

The 44-page booklet is available from Chepstow Books price £4.50.

The Chepstow Society’s next monthly talk, on Wednesday (January 19) , will be held via Zoom and will be on the subject of the war memorial.