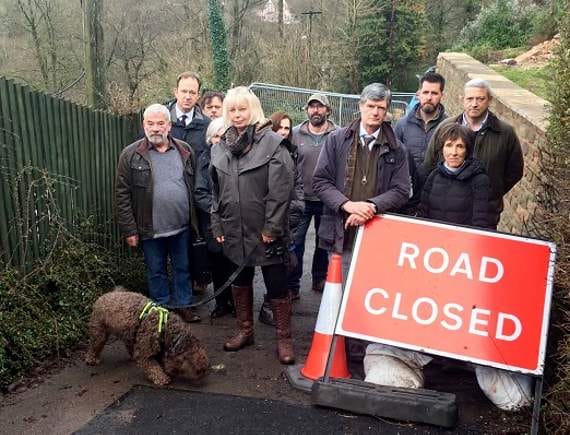 Residents of the single track C1257 road at Symonds Yat West are calling for action.

PEOPLE who have been practically cut off due to a road closure for almost two years are calling for urgent action as they struggle to recover from last week’s flooding.

The single track C1257 road at Sy- monds Yat West was closed in June 2018 after a stone wall and the road collapsed.

Currently, the only way for residents to access some 40 properties is via Ferrie Lane byway alongside the River Wye to the rear of The Old Ferrie Inn. But this lane is extremely narrow and it floods.

An appeal was rejected and the notice served by Herefordshire Council to the owners of the wall - David and Karen Murphy of The Brackens, Symonds Yat West - in April 2019 was ruled as valid, and it is their responsibility to repair the damage.

The council was told it should give reasonable time for action to take place, but resident John Blows, has written to the council calling for action.

“You will obviously be aware of the disastrous flooding at Symonds Yat this week and the enormous damage to properties and businesses and the suffering of those who have lost almost everything,” he said.

“The riverside property owners at the far end of the narrow byway, being the only access route, now have to organise necessary reparations caused by the flood damage.

“This means the use of skips and trucks which cannot of course gain access by this byway.

“The purpose of this letter is to emphasise the absolute priority of getting the C1257 access road repaired and reopened without further delay. “There need to be substantial resources directed at it, without restraint, to effect such a reopening, preferably within weeks, not months.”

A council spokesman said they were aware of the closure’s impact and thanked those affected for their continued patience.

“There are plans in place to carry out the necessary works, which we aim to begin this spring, and we are currently awaiting written confirmation of agreement to specification. We are working with all responsible parties to move forward at the earliest opportunity and will notify residents once we have further information.”