Following in the footsteps of a Forest literary great 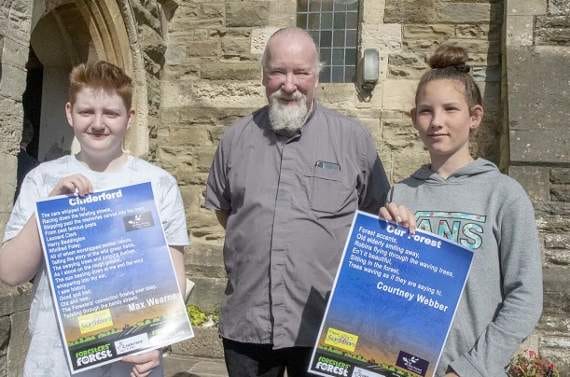 THE literary and musical traditions of the Forest – and especially the contribution of author Leonard Clark – was celebrated with a new generation of writers and a band marking its 130th anniversary.

The event at St Stephen’s Church in Cinderford featured readings of one of Leonard Clark’s comic stories, music from Pillowell Silver Band, founded in 1889, and poetry from students of the town’s Forest High School.

Presentations were made to some of the young writers who took part in a poetry competition at Forest High organised by English teacher Victoria Howard and the Dean Scribblers group.

The competition echoed the contests that Leonard Clark organised to encourage young people to write and to raise ambitions through participation and achievement.

The writer lived in Belle Vue Road, Cinderford, taught at one of Forest High’s predecessor schools, Double View Secondary, and later became a schools’ inspector with national responsibility for the poetry curriculum.

He was a regular worshipper at St Stephen’s where the event, sponsored by the Foresters’ Forest programme and Chepstow Bookshop, was held on Saturday (September 14).

Forest poet Maggie Clutterbuck read the chapter Bands from his book Fool in the Forest which is a comic re-telling of the struggles of a Cinderford band to get to a competition in Lydney.

The readings were made between music from Pillowell Silver, which included an arrangement of Abba songs and The Washington Post by John Philip Souza – which features in Clark’s book.

The event was also attended by two of the five poets from Forest High whose work particularly impressed the judges, authors Ben Ray and Sarah Franklin.

Ben and another of the organisers, Cheryl Mayo, held a workshop at the school last week to give the 45 students who took part in the competition some tips on performing their work to an audience.

Ms Mayo said: “It was an exhausting but energising experience.”

Dean Scribblers are hoping to produce an anthology of the work.

Judge Sarah Franklin – who is originally from the Forest – said the poems made her feel “a bit homesick”.

She said: “It was so interesting to see the range of work the students had produced.

“I grew up here and wrote a lot of bad poetry when I was (that) age, but I was amazed by the standard of the poems and the fact that the Forest is inspiring these thoughts and feeling in the students.

“There was an interesting range in the poems, some of them were written like they were the trees themselves,” she added,

“I live about 100 miles away and I was reading these poems and it made me quite homesick.

“You could feel the Forest in them and that is an amazing thing.

“I could see it and hear it and sometimes I could smell it.”

Courtney Webber and Max Weare read their poems in front of an audience at the church and were presented with their prizes by Cinderford vicar Rev Mike Barnsley, who is also a governor at the school.

Referring to Courtney’s poem, Mr Ray said: “This is a gorgeous, evoctive snapshot of a moment in the Forest – its brevity gives it a crisp clarity.

“I really liked the use of dialect, an important part of Forest life which works well here.

“The playful personification of nature in the last line with trees waving is an interesting take on the woods.”

Commenting on Max’s poem, he said: “There is a very clear and powerful sense of place and history in this poem.

“It grounds you in Cinderford and gives the sense of a guided tour while drawing in the Forest past.

“I particularly enjoyed the reference to previous Forest characters.

“The entwining of Mother Nature with Cinderford’s empty streets poetically summarised life in this area in an affectionate and knowing way.”

As I run down the trail

Light shimmers through the ceiling of leaves.

As intimidating as giants.

As I climb higher and higher

The adrenaline pumps through me.

When I reach the top

I can see throughout the valley.

And as I look down

I see the daunting height.

I see the beautiful lime leaves reflecting the light.

I should be enveloped by fear

But instead by awe.

And my feet finally touch the ground.

Robins flying through the waving trees,

Sitting in the forest,

Trees waving as if they are saying hi.

Trees remind me of waves

Brushing through the wind.

The forest is big,

The bugs climbing up the bark

The look of the bright yellow green leaves

Reminds me of a rainbow

Just remember to be in bed

By eight or nine…

The monster under my bed

My mum said so

I don’t believe her

I can hear strange noises

From under the bed.

The trees taller than I have seen,

Roots stronger than they have ever been,

Bright green leaves, as bright as a lime.

Stumbling off the tree, it took its time.

So long it could have committed a crime.

The independent tree has calmly stood

The bark crumbling away, just as it should.

Our mystic forest will stand for an age.

The cars whipped by,

Racing down the twisting streets,

Skipping past the memories carved into the town.

From past famous poets

All of whom worshipped mother nature,

Telling the story of the wild green fields,

The swaying trees and jumping bushes.

As I stood on the rough ground,

The sun beating down at me and the wind whispering into my ear,

The Foresters’ connection flowing ever deep,

Twisting through the bendy streets.