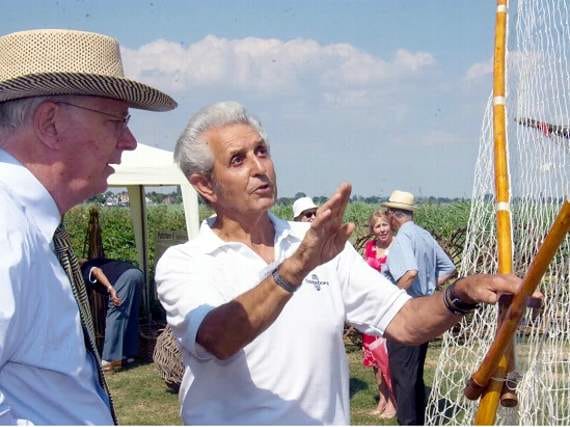 HRH the Duke of Gloucester (left) was shown how a lave net is constructed on a visit to the fish hut at Newnham last year.

SEVERN Estuary fishermen say the future of their ancient methods of catching salmon are threatened by the sudden decision of the Environment Agency to delay the start of the season.

The body blow for net fishermen in the English stretch of the estuary arrived in a letter on Saturday morning — the first day of the new season — telling them the agency needed extra time to review the current state of salmon stocks and decide what protective action was needed.

The agency says figures show a ‘significant reduction’ in salmon numbers in the Severn, Wye and Usk.

The start of the season is being delayed until June 14 “when a decision will be announced on what further action is needed to protect the species.”

Fishermen have been told the agency is considering an emergency by-law which would prohibit catching salmon by draft net or putchers and require any of the fish taken by lave net to be returned to the river.

Lave net fishermen at Black Rock near Caldicot – which is under the jurisdiction of the Natural Resources Wales – have received their licences and started fishing on Monday afternoon (June 3).

The Severn Estuary (Nets and Fixed Engines) Fishermen’s Association says that no-one is more keenly aware of the low level of stocks than them, but argue that a balance has to be struck to enable some fishing to take place.

The netsmen are to ask Forest MP Mark Harper to work with other Gloucestershire MPs to put pressure on Fisheries Minister Robert Goodwill to rethink any ban.

A spokesman for the fishermen said: “ If the agency was truly serious about conservation they would seek a ban for all methods of capturing fish and that might be something we could support.

“To play the rodsmen against the netsmen is blatantly unjust and reveals the agency is out of step with reality.

“They have been huffing and puffing about the level of stocks for 20 years now, but all they have achieved is to close down a hatchery and build a couple of fish passes.

“They need to come into the real world where we all work together for the betterment of the river.

“There are many problems and they will not be surmounted by playing divisive war games.”

The Environment Agency said it is considering an emergency by-law to prohibit salmon fishing with nets in the estuary for the current season, which runs until August, or whether other action can achieve the protection that is required.

Part of the review will be to consider whether rod anglers will have to return to the river any salmon caught after June 16.

David Hudson, the agency’s environment manager for Gloucestershire, said: “We have not taken this decision lightly.

“There are a variety of environmental factors that have led to the decline in salmon stocks in the Severn estuary, it’s not just about the number taken through fishing.”

“But only through taking action now, and through the co-operation of others, will we manage to protect this iconic fish in the Severn for future generations.

“Doing nothing is not an option.

“I know this will impact many fishermen and am sorry for the disruption, but it is essential we take strong and immediate action to protect salmon in the River Severn as they are particularly at risk.

“We are liaising with our colleagues in Natural Resources Wales and Natural England and with those affected.”

The fishery at Black Rock, Portskewett, is considered to have no significant effect on salmon numbers.

The average catch each season for the group – is seven fish.

Secretary Martin Morgan said: “For the last 15 years, our lave net fishery has shown the way forward for heritage fisheries to survive in the 21st century.

“It is supported by the Welsh Assembly Government and there is a strict agreement.

“Our catch – whether it be one salmon or the limit of 15 per season sustains the ancient fishery, our heritage and our way of life.”

Visitors can watch the fishermen in action from the picnic site which gives a panoramic view of the estuary.