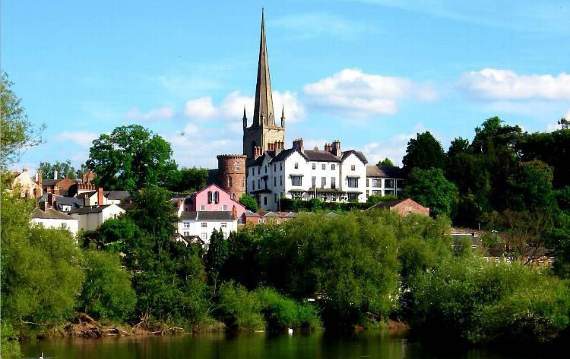 Prince Charles is visiting Ross-on-Wye on Tuesday to celebrate its 250-yearassiciation with the tourism industry. Picture: Visit Ross-on-Wye.

A YEAR-LONG festival marking the 250th anniversary of the birth of the modern tourism industry on the River Wye has been given a Royal seal of approval - with Prince Charles set to launch it next Tuesday (November 5).

The Prince will attend the start of the Gilpin 2020 festival in Ross-on-Wye, when His Royal Highness will tour a produce market in the town’s ancient Market House and meet groups representing the strong philanthropic heritage of the town, including local community organisations and their business supporters.

Organisers say there will be a colourful celebration through Broad Street, entertainment from local groups and live music from the town band.

A statement on HRH’s official diary page says: “The Prince of Wales will visit Ross-on-Wye and officially launch the Gilpin 2020 Festival, to celebrate the town’s role as the birthplace of British tourism.”

It’s the second big boost for festival organisers this month, with the announcement last week that the Wye Valley Learning Network had awarded it a £12,000 grant to help create a virtual Wye Tour.

A judging panel which volunteered on behalf of Rural Media’s Great Place Hidden Gems grant scheme determined which projects should be allocated funding, including the Gilpin festival.

Schools and organisations, including Brampton Abbotts Primary School, the Ross Tourism Association, and the Ross Civic Society will all be getting involved in Gilpin 2020, which is aiming to strengthen links with providers of local tourist attractions.

The festival marks Rev William Gilpin’s visit to the town in 1770, which he documented in the UK’s ‘first tourist guide’ highlighting the cruises up and down the river.

The Wye Tour saw artists, poets and other lovers of natural beauty like Wordswoth, Coleridge and JMW Turner take boats downriver as far as Chepstow.

It proved such a success it effectively created the ‘package holiday’, bringing visitors to the Wye Valley who dined and picnicked at evocative locations, took walks to viewpoints and visited romantic ruins such as Tintern Abbey, making the ‘Wye Tour’ one of the first ‘package’ holidays.

Inspired by the beauty of the Wye Valley, Gilpin promoted the ‘Picturesque’ art movement, leading to many artists visiting to paint, draw, and write about the landscape.

The launch will also see the Wye Valley AONB launch its booklet, The Picturesque Wye Tour, which has been written to celebrate the Gilpin 2020 festival, and will culminate in a procession from the town centre to light a beacon at the Prospect, claimed to be the first public pleasure ground in England, which overlooks the launch site of the tour boats.

For more information on Gilpin 2020 events, the tour and history, visit www.gilpin2020.org