Town mourns loss of its 'Mr Fix It' 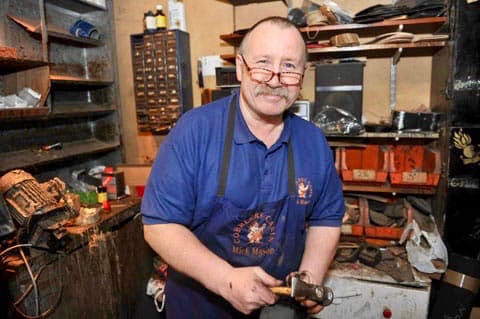 HUNDREDS have paid tribute to a town’s ’Mr Fix It’ who could literally mend anything.

Former Royal Engineer and father-of-seven Mick Mason ran Cobbler’s Cabin in Chepstow’s Rifleman’s Way for more than 20 years before his passing last Saturday in hospital at the age of 68.

Wife Sally posted on the Chepstow Community Facebook page: "It is with great sadness that I have to announce that Mick sadly passed away yesterday after a short illness bravely born.

"We were all privileged to be with him when he passed peacefully away.

"Cobblers Cabin will now be closing down and I know many people who have used his services over the years will be sorry to see an old established business closed for such sad reasons."

The news saw more than 500 tributes posted to ’Mick the Cobbler’, one of a kind, who could mend all sorts of things from re-heeling old boots and shoes to fixing broken bag straps and belts as well as cutting keys and engraving.

Son Stefan said: "Dad was the guy to whom people took all their things that needed mending, stuff they couldn’t bear to throw away.

"We’ve seen that in the last few days from the sheer number of people who’ve posted well wishes and tributes online saying how shocked they are and how much he’ll be missed."

A carpenter and joiner by trade, Suffolk-born Mick set up his cobbler’s business after coming out of the Army where he had been based at Beachley, and quickly made an impression on townspeople.

"Walking into that shop was like stepping back in time," said Stefan.

"The smell of the glue and the polish, it took you right back. It’s very old school and it’s the kind of thing you see less and less of these days, sadly."

Among the many tributes to him, former shop neighbour Paul Easton posted: "So sorry to hear this.

"I spent 15 years running and working in the shop next door to the old Cobblers Cabin just by the old Bell Chambers as it was then on Rifleman’s Way.

"Mick was a lovely generous funny guy always willing to help and share through the years we spent alongside each other.

"For 15 years we would greet each other every morning as we opened up and banged up our windows in the summer to start work, me playing rock music Mick playing his opera."

Steve Clark added: "So sad to hear of the loss of an old friend under such tragic circumstances.

"A guy who played it straight and honest. Worked alongside him for a few years and have some great memories. RIP ’Sapper’ Mick."

Lizzel Winter posted: "Mick was a great guy and will be missed by so many."

And Paula Rooke said he was "an absolute gentleman" with "an enormous character."

Jane Eickhoff wrote: "Mick was literally a local hero. He was always helpful with any repair and such a character. He will be sorely missed by the entire Chepstow community." While Mel Hayden added: "Mick was such a character, a great loss to Chepstow." Other tributes spoke of "a craftsman and true gentleman", who shared "lovely smiles and stories".