We’ve got that sinking feeling 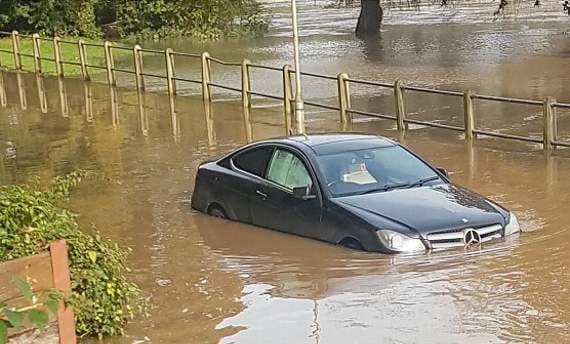 Record levels were recorded on water level websites, with rivers bursting their banks and flooding roads and land in Lower Lydbrook, Symonds Yat, Monmouth, Ross-on-Wye and many other places.

Lower Lydbrook on the Wye was cut off on Monday, with a party of 20 holidaymakers marooned in the former Courtfield Arms, while some bridges along the Wye and Monnow were underwater and closed, including Huntsham and Kerne Bridges near Goodrich, and Tregate near Monmouth.

Water levels on the Monmouth’s historic Monnow Bridge in Monmouth were the highest seen in many years, with the water almost topping its arches on Saturday as it reached more than 6m.

Some people staying at the Monmouth Caravan Park yards away were evacuated by emergency services using boats, while more than 50 residents living beside the Wye in the Riverside Residential Park next to Monmouth School for Boys’ sports complex were advised to leave on Monday to avoid an “emergency” situation, with water levels lapping at the doors of the mobile homes.

Many roads were impassable, with police closing some and drivers advised not to attempt to drive through others already underwater.

Herefordshire Council closed Ferrie Lane in Symonds Yat heading towards Ye Old Ferrie Inn, leaving another party of some 20 holidaymakers to sit it out stranded in Holly Tree House, while other village residents were advised to leave.

In Monmouth, Osbas- ton Primary beside the River Monnow was cut off when the river burst its banks, with Forge Road and Osbaston Road both flooded, while Overmonnow’s Rockfield Road, Watery Lane and Wonastow Road were also underwater, along with the Wye Valley Road in Wyesham.

Monmouth Rowing Club was surrounded by water at least two feet deep, but the flood gates under the dual carriageway were closed in time to keep Monmouth Comprehensive School dry.

The river also burst its banks near Ross Rowing Club, with the town’s Lions Club later cancelling Saturday’s (November 2) firework display beside the Wye owing to the site being waterlogged and logistical problems.

Monmouth’s official fireworks display, organised by the Round Table on Tuesday, November 5, could also be at risk, while the 400-year-old Wye Bridge just yards away now has a huge pile of tree debris trapped upstream on its central arches, putting pressure on the structure, which will have to be removed by crane when the water subsides.

There was also heavy flooding from Monmouth Civic Tip to Mitchel Troy from the River Trothy, and traffic was also affected between St Briavels and Chepstow owing to flooding between High Street and Oakhill Pitch.

Lydney Town AFC’s pitches were inundated, after the club spent thousands on new drainage, while other places affected included Hanley Court farm shop at Stroat, Alvington by the Globe pub, Blakeney, Chaxhill near the Severn and Wye Smokery, Westbury-on-Severn, and Huntley.

Gwent Police and the South Wales Fire and Rescue Service urged elderly residents at Riverside Residential Park to leave their homes the same day before events turned into an “emergency rescue”, with the Wye topping 6.5m andsurpassing the 5.84m reached in 2014.

The park has 35 park homes with a central open green space, and caters for retired people over 55.

Monmouthshire Coun-cil said it provided transport to Shire Hall in the town centre, which was set up as a temporary rescue centre for people to spend the night.

Paul Mason, group manager at South Wales Fire and Rescue Service, said 16 residents had refused to leave, with one elderly man saying it was the third time in 20 years high water had threatened his home, but it had never flooded yet.

But he said he was worried about the rubbish blocking the bridge 100 yards downstream.

A police officer stayed on site all night to advise anyone returning to stay away and return in the morning.

“The rain may have subsided, but some river levels are still rising as peaks move downstream. We’re encouraging people to stay vigilant and check our website for flood warnings and listen to any advice given on what action to take.”

Gloucestershire Police said on Monday a multi-agency meeting had been held to discuss the response to flooding in Lydbrook and the flood warnings in place.

“The police will continue to work with partners including the Fire Service and Environment Agency to monitor the situation, warn people of the risks and respond accordingly,” they said.

“We would advise all residents in affected areas to sign up to flood alerts at www.gov.uk/sign-up-for-flood-warnings.”

A joint statement by Gloucestershire police and fire services and the county council and forest of Dean Council yesterday added: “Water levels are slowly dropping and highways crews will be visiting Lydbrook, Wainlodes and Symonds Yat areas this morning to assess the roads, bringing in a road sweeper to clear the highway of mud if necessary.”

PCSOs were also visiting to check on residents in flood-affected communities, while council officers were on site at Brockweir helping residents with properties overnight during the high tide.

Further flood information is at flood-warning-information.ser vice.gov.uk and flood warnings can also be checked at www.naturalresources.wales/flooding

•To see more photographs head over to our facebook page @TheForestReview