Work is to start on bells 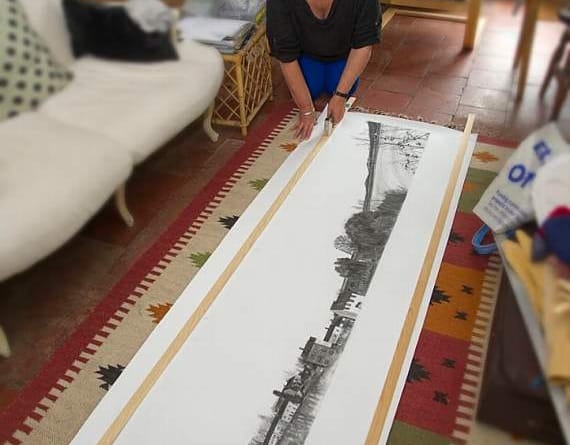 THE long-awaited work to restore the bells of Newnham Church is due to start early next month.

In 2012 it was discovered that the eight bells at St Peter’s Church were in such a poor state that they would fall silent without major restoration.

Just under half has come from local supporters through donations, fundraising events and an allocation from church reserves.

The latest fund-raising effort will see the sale of a large charcoal drawing of the River Severn by local artist Carolyn Black.

Andy Vivian, one of Newnham’s bell ringers said: “We’ve been patching up where we could but it is a great relief to know that we can now finally get the bells working properly.

“We’re adding a new raised ringing floor to help control the bells, recasting three of them to make the peal lighter and adding a glass screen to the ringing chamber which will allow more light into the church.

“Creating a more accessible bell tower, with bells that are easy to ring, will make this an ideal venue for bell-ringing courses and learners.”

Bell-ringers have struggled to ring the heavy bells which are hard to control and almost impossible to learn on.

Surveys have also revealed that not only were the bell fittings damaged and worn but the bell frame was unstable.

The situation was not helped by the Victorian trend for increasing the weight of bells which has left them too heavy for the slender tower.

The project has received £20,000 from the Gloucester and Bristol Diocesan Association of Bell Ringers – the organisation’s largest ever.

Six local volunteers will be assisting bellhangers, Nicholson Engineering, to lower all eight bells down through three hatchways in the tower.

The frame will follow, dismantled and lowered piece by piece.

The bells were to have gone to the Whitechapel Bell Foundry in London but following its unexpected closure last year they will now be sent to the Royal Eijsbouts bell foundry in Holland where the heaviest bells will be recast.

The cast iron frame will go to Nicholson’s works in Bridport, Dorset, for sandblasting, recoating and rebolting.

The artwork by Carolyn Black will be sold by an auction of sealed bids.

At two metres across, the Newnham picture is the largest of a series of charcoal drawings of the Severn.

The decision to auction the picture came about because of voluntary work that Carolyn did for the appeal.

She said: “I offered to help set up their website and took some panoramic shots for the front page,” she said.

“Visit the appeal website at www.newnhambells.wordpress.com, and you’ll discover the original shot which inspired me to undertake this drawing.

“I want to support the bells appeal and donating the work feels like the right way for me to help.”

The picture can be seen in the window of the Quaker Library in Newnham until Friday (June 22), the deadline for bids.

Bids should be placed in a sealed envelope along with your name, number and email address and delivered by midnight on Friday, to Art Auction, Quaker Library, 26 High Street, Newnham, GL14 1BB.