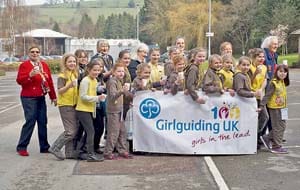 •Representatives from 14 units on the star quest walk celebrating 100 years of Brownies.

FOREST Brownies celebrated their 100th birthday with a fire engine and snake on Saturday.

Around 200 young Brownies from groups as far as Sedbury to Newent gathered at the Rank Xerox conference centre in Mitcheldean for the Big Brownie Birthday.

As part of the national Big Brownie Birthday Star Quest, the Brownies spent the day starring in their own cosmic story, travelling through three time zones to find lost stars and on their way encountered new and exciting adventures.

Such adventures included old games, dancing, singing, rocket making, crafts, and a visit from some reptiles, an owl, and even Cinderford fire brigade.

Once all the stars were collected there was a grand finale and pom poms which all the Brownies made were launched using a large parachute.

Gina Matthews of Forest North Brownie Guiders, said: "It was a brilliant day, the girls really enjoyed it and there was lots of thanks from the parents."