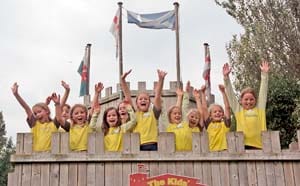 •Princesses of the castle, the 3rd Tidenham (St Mary’s) Brownies, commemorate 100 years of the organisation.

FOREST and Wye Valley Brownies joined others from all over the UK to celebrate the centenary of the founding of the organisation.

The Big Brownie Birthday has seen many events throughout the year, culminating in a giant party, voted for by the girls themselves, as they took over Cattle Country open farm near Berkeley.

Brownie Chloe, 10, from Lydney, said: "Cuddling the guinea pig was the best bit of the party."

Brownies Loretta and Millie, aged nine and 10, and also from the Lydney group said: "Today we've done drop slides and trampolines. Brownies is really fun, and we've both done our swimming badge."

Leader Ali McEwan said: "This was an opportunity for all Brownies to enjoy a finale to the 100 year celebrations - this year is all about the Brownies, so it was right that they chose how to celebrate.

"Everybody had a great time, and it was a fitting way to mark 100 years of Brownies."