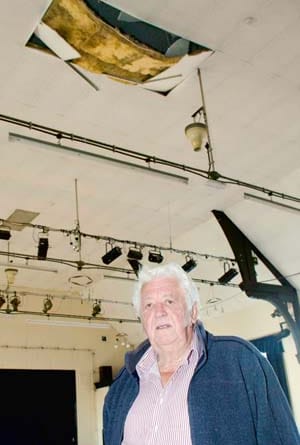 A GROUP of Brownies miraculously escaped injury after a ceiling at Lydney Town Hall collapsed during their sleepover.

The youngsters, from Cwmcarn near Newport, Mid-Wales, were camping in the main hall earlier this month as part of their five-day trip to the Forest, when storm damage under the roof caused plasterwork to fall from the laths onto the insulation and ceiling tiles, causing an area to drop into the hall.

Only days before, the downstairs under-stage area was swimming in four inches of water after the drains couldn't cope with the volume of rain. It took caretaker John Aldecoa and trustee Judith Cadogan – with their trousers rolled up – to clear the mess with a makeshift pump. As a result the carpets had to be thrown away.

Chairman of the hall, Colin Knight said: "Luckily, the Brownies were unhurt and it didn't affect the rest of their trip, but it does leave us with a lot of work to check the state of the roof space and to repair the damage. We don't have a clue what the cost of the damage is as a scaffold needs to be put up inside the main hall, which should be sometime this week.

"Obviously the main hall will remain closed until a full assessment has been undertaken which means we have had to cancel events, but the meeting rooms and bar are still open.

"We have not had a problem before with the ceiling and the hall hasn't flooded in the last 18 years. We can only put it down to a freak storm."