Coleford comes to life with sound of music 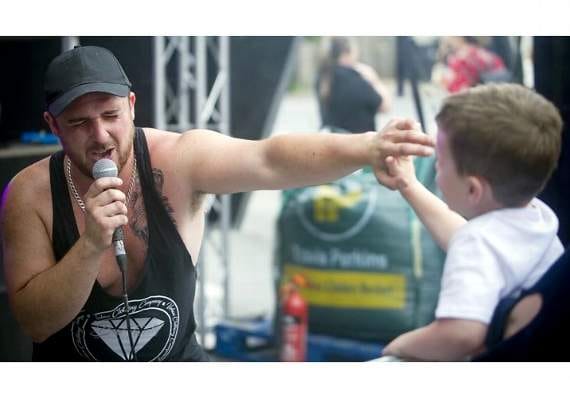 THERE was a big rise in numbers heading to Coleford for the town’s two-day music festival over the weekend compared to the previous year.

The free festival brought together musicians and singers performing a wide range of genres, from a school choir to veteran rockers.

A campaign to reduce the amount of plastic at the festival has also been hailed a success.

“It’s also doubly pleasing, as attendances to this year’s festival are also up by about 15 per cent.

“However, to make improvements in the future we are seeking additional sponsorship.

“And not having so much litter to clean up at the end of the festival was a delight and shows how effective our campaign against single use plastic has been.”

There were stages around the town including at the Clock Tower, in St John Street and Newland Street.

The town was decorated with bunting created by visitors to the town centre over the weekends in the run-up to the festival.

The event also had a range of street entertainers and a children’s corner.

She said: “It is very rewarding to see many young bands improve over the year and being keen to play at the festival.

“I think there are a number of musicians playing this weekend who will go on to bigger and better things in the future.

“And the established bands were a big attraction too, boosting our overall attendances over the whole weekend.”

“The amount of general waste generated over the weekend was significantly reduced, largely thanks to our reduction of single use plastic.

“The scheme has been a success, as we have seen a dramatic decrease in the amount of litter throughout the festival.

“We will be looking at introducing sturdier plastic glasses for next year and getting the pubs involved in using them as well,” she added.

“Prior to the festival itself we expanded our arts workshops to decorate the town.

“We also took the opportunity to expand the concept over the weekend, and it attracted a lot of families to our stall and children went away having created flags of painted rocks, while others enjoyed putting their mark on the graffiti wall, she said.