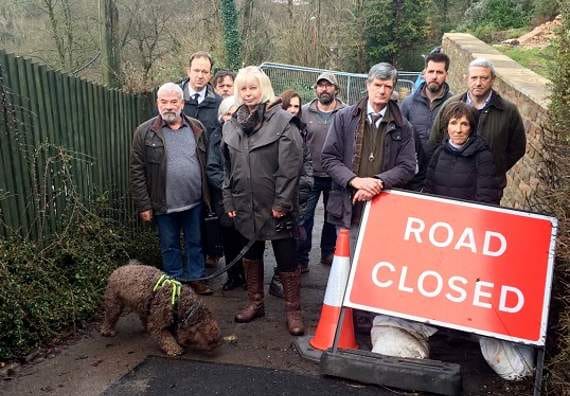 Residents have been demanding action to reopen a village road for over a year.

VILLAGERS are still suffering a road closure more than a year after part of the road subsided.

A total of 40 properties in Symonds Yat have been almost cut off from the rest of the world due to the shut road in the picturesque Wye Valley.

The single-track C1257 road at Symonds Yat West was closed in June 2018 due to a combination of a dangerous wall next to the highway and damage to the highway itself, caused by an ongoing landslip.

The only alternative for residents to access their properties has been via the Ferrie Lane byway alongside the River Wye, to the rear of The Old Ferrie Inn.

The byway is narrow, with a maximum vehicle width of 6.2ft, unlit at night, with some steep drops to the river – at its lowest point it sometimes floods when the river is high.

Herefordshire Council is responsible for the condition of the highway and the safety of the public, but the wall is privately owned and remains the responsibility of the owner of the adjoining property.

There is an ongoing dispute over who should be responsible for fixing the road, as the slippage occurred after repeated underground water main bursts.

The council said last year it was in dialogue with the owners of the wall to try to resolve the situation collaboratively and without having to resort to potentially prolonged legal action.

And local MP Jesse Norman volunteered in February to broker a meeting to reopen the road.

“If the current discussions are not successful, I’m very happy to try to broker a way forward between all the parties,” he said six months ago.

Kerne Bridge councillor Paul Newman, who welcomed Mr Norman’s offer and also volunteered to help, said at the time he was shocked and disappointed by “the apparent inactivity and lack of urgency” shown by the council and its contractors.

“It’s almost inconceivable that after yet another four months, I can be here saying exactly the same thing.

“We need more energy and a determination to find positive solutions to bring an end to the awful isolation of this local community.”

However, the wall owners Mr and Mrs Murphy were served with a notice in April requiring them to repair the wall or the council would do the work and charge them accordingly.

The couple have since appealed this notice and a court hearing is scheduled for October this year.

A Herefordshire Council spokesperson said: “The appeal hearing is listed for up to four days at Hereford Magistrates’ Court.

“As this is an ongoing legal matter, we will not be commenting further at this time.”