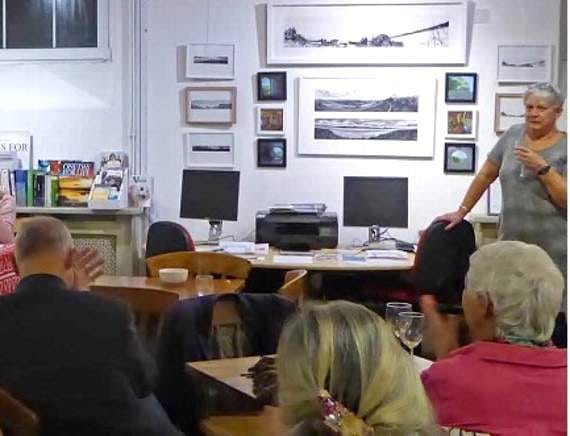 Carolyn Black (right) giving a reading from her book at Newnham-on-Severn Library.

AN artist who has lived on both banks of the Severn estuary has brought together a series of artworks, as well as stories and a history of the places she has visited, into a book.

Carolyn Black, from Newnham-on-Severn, describes Severnside – an Artist’s View of the River Severn as a ‘travelogue with a difference.’

“It contains many of the drawings, which serve as markers along a circular road trip that begins, and ends, at The Old Severn Bridge.

“This is my first publication and the result is a book packed with stories, history, drawings and tall tales. It was inspired by A Fortunate Man by John Berger.

“In January 2017, I began to work on a series of large-scale, panoramic, charcoal drawings of the Severn, several of which were exhibited and sold.

“There were special sales, too, such as the one for a fundraiser for St Peters Bells Appeal in Newnham, which raised £1,500 towards the bell restoration. While I worked in my studio on the drawings, I also wrote – fact-gathering and collating memoirs about my long relationship with the Severn. Together, these became Severnside.

“It is both factual and playful and even a little bit opinionated. Having fallen in love with the Forest I now plan to go further up and work in response to the Wye.”

An exhibition of work about the River Wye was held recently in Brockweir, and Severnside will be available in the Brockweir and Hewelsfield Village Shop and at Longhope Bakery over Christmas.

The book has been published under the imprint of Artdotearth.org