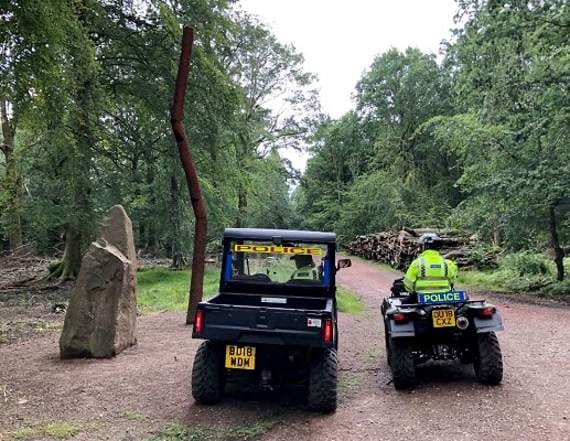 A POLICE operation which has successfully targeted anti-social off-road motorbike riders is being extended to the Forest of Dean.

Operation Endurance will see Gloucestershire Police working with local councils and the Forestry Commission to tackle what is seen as an increasing problem.

The police have called on the public to report incidents and if possible take a photograph of the offending biker.

They have also issued a warning about glass being left on footpaths and tracks which may have been deliberately left to target off-road bikes.

The extension of Operation Endurance into the Forest follows the success in Cheltenham where about 25 bikes have been seized and their owners reprimanded since Endurance started in May this year. It started in the Forest on Sunday (August 11).

It follows an incident in Cinderford last month where two bikes being ridden in Abbots Wood almost collided with a couple and their two young children.

Following an appeal for witnesses, the bike owners were identified and given warning notices under Section 59 of the Road Traffic Act.

Depending on the incident, that is one of the options that could used against other offenders who are identified, said a spokeswoman for Gloucestershire Police.

PC Cath McDay and PCSO Sue Pritchard have been instrumental in getting the operation up and running and are working closely with Forestry England.

PC McDay said: “We have a good working relationship with the rangers at Forestry England and are working together to reduce crime and anti-social behaviour which can so easily spoil the enjoyment of many of the local people and tourists who visit the Forest.

“We have launched this operation to track down nuisance bikers and urge members of the public to help us by reporting incidents and, if possible, supplying photographic evidence..”

A spokeswoman for Forestry England said: “We are very concerned about the number of anti-social incidents reported to us within the Forest of Dean and we are working with the police to prevent them.

“Our forests are enjoyed by walkers, cyclists and horse riders – they are also home to many animals, including large wild animals such as deer and boar.

“Riding off-road vehicles in our forests not only disturbs people and animals, it is extremely dangerous.

Should a collision occur between an off-road bike and any person or animal, the results could be fatal.”

Police and Forestry England say that all users of forest tracks are at risk of injury from large shards of glass that have been placed on them.

A member of the public reported moving large pieces of glass from near Perch Drive in Coleford which, they believed, were to target off-road bikes.

Forestry England has also received a number of reports and staff are working with the police to stamp out the issue.

PC McDay, who is based at Coleford, said: “This practice is very dangerous for everyone who uses these tracks regularly whether they are walkers, horse riders or cyclists.

“They have a legitimate right to be there and enjoy themselves in the forest without risk of being injured.

“We need to find out who is doing this and stop them before anyone comes to harm.”

Anyone with information about who is responsible for the glass, or is aware of any suspicious activity, is asked to speak to their local officer or call Gloucestershire Constabulary on 101.