Firm has Royal seal of approval 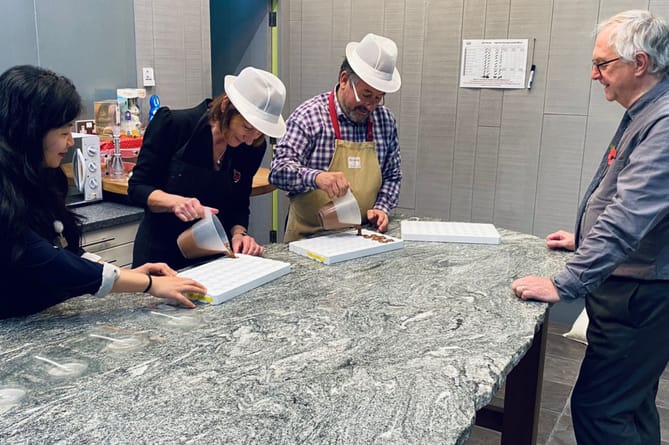 A FAMILY-run business in Coleford has officially been given "the Royal seal of approval" following the presentation of a prestigious award for international trade.

The family team behind DPS Designs Ltd, which is based at Mushet Business Park in Coleford, were presented with a Queen’s Award for Enterprise (QAE) award by Deputy Lord Lieutenant of Gloucestershire Viv Hargreaves and Gloucestershire County Council CEO Peter Bungard last week.

The innovative family firm, which has just 40 employees, designs and makes chocolates for top brand names and engineers products for the automotive and aerospace industries.

The company, which has been designing and making tools and chocolate moulds since 1995, received the Queen’s Award for Enterprise for International Trade back in 2020, but the presentation was delayed because of the pandemic.

The accolade is the highest official UK award for British businesses.

DL Hargreaves and Mr Bungard were invited to make chocolates in a special mould created for the occasion and had a tour of the company’s "remarkable" factory.

The business grew from an idea when engineer Leigh Down recreated some brand name Easter eggs for his children who were allergic to chocolate.

He went on to found the company with his wife Nicki, and the pair built the family-run enterprise with their son Sebastian and daughter-in-law Fanzi, who recently won a Women In Innovation Award from the Government.

Fanzi, who is Commercial Director for DPS, said: "The Queen’s Award for Enterprise has given us a seal of approval which has been much deserved by the team for their hard work over a long period of time and the foundations laid by Leigh and Nicki.

"It also gives us the confidence to take our growth forward and the credibility abroad which is so important."