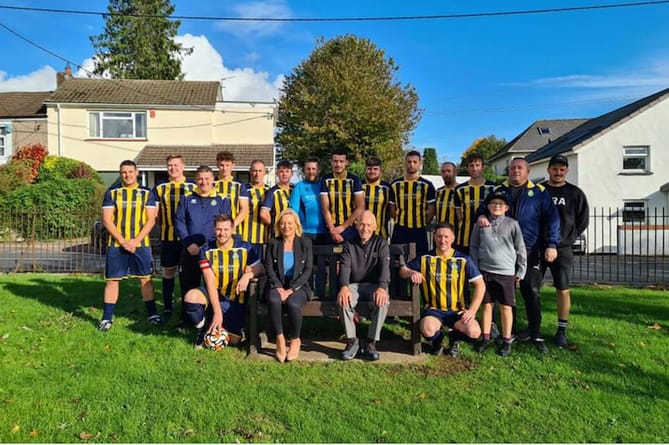 A BENCH to the memory of all-round sportsman Neil Bradford has been installed in the park where he played football as a youngster.

The bench has been installed on Tutshill Rec by Neil’s father Roger.

Neil died in Ohio in the United States after a long illness in 2016 at the age of 44.

Mr Bradford is pictured with the Tidenham team and Mel Bevan of the club’s new sponsor, Caldicot-based solicitor Bevan, Evans and Capehorn ahead of last Saturday’s game against Yorkley.

The Bradford family has a long association with Tidenham FC - Neil played for them as a junior, his father Roger ran the junior section and his father also ran the side.

As well as playing for Tidenham, Neil was also signed by Bristol City at the age of 13, played rugby for Gloucestershire, ran the 800m for the county and football for Lydney.

Neil went to the United States at around the age of 30 to run socer camps.

He then became national director for children’s football, travelling the States coaching youngsters.

Among them, for some nine years, was Rose Lavell who went onto to win the World Cup with the USA team in 2019.

Mr Bradford decided to install the bench in memory of his son after seeing one similar at St Pierre where he plays golf.

He said: "I play golf at St Pierre, saw similar and liked it.

"It’s made of recycled plastic so it will last a long time."

Mr Bradford was given permission to install the bench by the trust that manages the recreation ground but there was a delay because of Covid.

He was sat on the bench as Tidenham won their North Gloucestershire League first division match.

They beat Yorkley 3-0 with goals from Luke Best, Alfie Sessford and Ryan Shipp.

Tidenham were 2-0 up at half-time and got their final goal in the 90th minute.

A club spokesman said: "The sponsors for a new team kit are Bevan, Evans,and Capehorn - so a big thank you to Mel Bevan and her team of solicitors based in Caldicot.