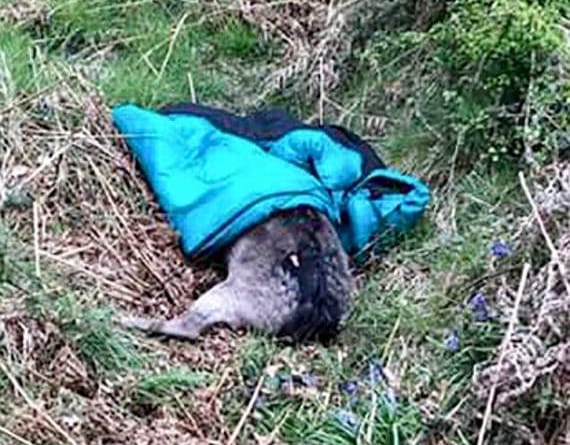 A PREGNANT doe met a gruesome end when it was caught on fencing installed to protect a rare butterfly, and another deer was killed close by on the same day.

The incidents, on Friday (May 3) near Cinderford were recorded by wildlife activist, Ray Puttock from Newnham who discovered the doe struggling.

Police confirmed that one animal had to be destroyed after it was caught on barbed wire and another because it had broken legs.

Mr Puttock said on social media, in a post which was shared 1,500 times: “This is the new Forestry Commission fencing in the Forest of Dean.

“The extra strand of barbed wire tight on the top is pointless unless you are a deer. Two deer died within a few hundred yards of each other today.

“The beautiful fallow I have just been out to was carrying a fawn. She didn’t need to die … She died because of that strand of barbed wire.”

The police, who responded to the incident, ensured the deer were killed humanely and Ray described them as ‘unfailingly excellent.’

He said of the doe: “When I cut her off the fence, the barbed bit was deep in her flesh and had torn all her tendons.

“It’s the tendons that make them unsaveable. Plus she had dislocated her hip.”

A spokesperson from Forestry England (FE) said, following the incident at Ruspidge Halt (Linear Park): “We are extremely saddened to see that a deer has been caught in fencing. We will be reviewing the fence specification.

“We are aware that a humane dispatcher was called to attend the site after members of the public reported seeing the deer in distress.

“We would urge people that find a wild animal injured or in distress not to approach it but to call Forestry England on 0300 067 4800 or, out of hours, the police on 101, where they have out of hours contact details for our wildlife rangers and a list of humane dispatchers.

“It is very important to not try to help the animal, as this can increase the stress and which often leads to death.

“The fence in question was installed a few months ago as part of a butterfly project, which aims to create or restore a network of open spaces throughout the Forest for this butterfly to flourish again and potentially reintroduce them into areas of where local extinction has occurred.

“Ruspidge Halt is one of just two breeding sites left for the Small Pearl-Bordered Fritillary in the Forest of Dean, a number that has fallen from 40 sites since the 1980s.

“The Forest of Dean is the last remaining foothold in Gloucestershire for the species, which has undergone large national declines.”

A spokesperson for Gloucestershire Wildlife Trust (GWT) added: “We are saddened to hear of deer being caught in a fence line in the Forest.

“We are currently investigating, along with our partners, where the incident took place but have had no direct reports to GWT.

“As part of the Foresters Forest conservation grazing project, fencing has been installed to help us manage the open heathland, providing an important habitat for many rare and protected species to thrive.

“In order to eliminate any possible harm to deer, we have been trialling a new solution, fitting the existing fence line with a wire mesh to reduce the likelihood of deer becoming trapped.

“The trial at Woorgreens nature reserve is nearing its conclusion, and there have been no reported incidents at this site since it has been installed.

“We encourage anyone who finds wildlife in distress on our nature reserves to contact us directly and to inform the Forestry Commission through the main switchboard.

“Each site has a fencing specification designed to meet the needs of the project,” added the FE spokesperson.

“Barbed wire is sometimes needed to prevent cattle and ponies from pushing the fence over when they rub against it.

“If barbed wire is used then it is one strand tightly ringed to the top of the stock fencing, as this has been proven to reduce the chance of deer getting caught,” they added.

“Planning for fencing involves checking the site for existing animal runs and tailoring the fencing accordingly, for example by adding wooden top rails fixed over the top of the fence in locations where deer have been seen to jump over.”

A Gloucestershire Police spokesperson said: “I can confirm that on Friday, May 3, Gloucestershire Constabulary received two reports of injured deer in the Cinderford area and that both animals were humanely dispatched by authorised marksmen.

“The first incident was reported shortly before 6.30am and concerned a deer which was caught on barbed wire.

“The second incident was reported shortly before 6.30pm and concerned a deer which had broken legs.”