Ringing in the staircase 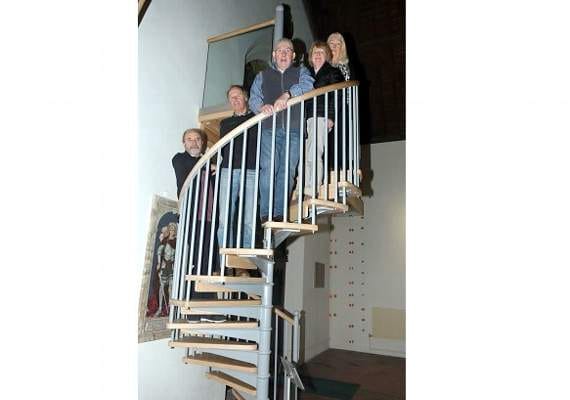 A SPIRAL staircase is taking local bell-ringers a few steps closer to their ultimate goal.

Newnham-on-Severn residents have been fundraising for several years to restore the church bells as they celebrate 1,000 years since the foundation of the parish.

And the spiral staircase and gallery at the rear of the nave in St Peter’s Church will now give campanologists access to a new ringing room as part of the project.

The work was unveiled in time for Remembrance Sunday and Newnham vicar, Rev Rob James, said: “When the builder’s boards came down and we could see the spiral stairs and gallery properly for the first time I just thought ‘Wow’.

“It looks very modern and yet fits in well with our Victorian nave.”

After climbing the spiral staircase, visitors can enjoy a bird’s eye view of the church from the gallery. The ringing room itself is behind a glass screen on which are written the words, “Celebrating 1000 years of Newnham Parish 1018-2018”.

It was during research for the project that it was discovered that the first priest appointed in Newnham took up his post exactly 1,000 years ago.

Appeal chair, Cameron Dickie, said: “We are delighted with the way that architect Ruth Nicholl’s design has come out. And Fieldhouse Builders, our main contractor, have done us proud. We were hoping for a piece of architectural heritage of which Newnham could be proud, and I think that’s what we have.”

Bev Bowles, a churchwarden at St Peter’s added: “Apart from the beautiful new staircase and gallery, one of the unexpected benefits is the amount of light that floods into the church from the West window, which was previously obscured. I’m also looking forward to hearing the bells ringing out over the village once again.”

A glass door takes you into the panelled ringing room which will become a classroom for the next generation of Newnham ringers. Wiring is already in place to install a bell simulation system so that learners can practice bell handling with the bells silent.

Meanwhile, work on restoring the bells and their frame continues at Nicholson Engineering’s Bridport works.

The bells have already been retuned and the old sixth, seventh and eighth bells have been replaced by three newly cast bells.

Project coordinator, Andy Vivian, said: “The bells were too heavy for our slender tower and these new bells will make the peal one and a quarter tons lighter.

“Lighter bells mean higher notes. The pitch of the bells will rise by a tone and a half from the key of E to the key of G. While the bells are away, we have been making the most of the empty belfry to get other repairs done. We have repaired damaged louvres, replaced a worn out lighting system and cleaned and recoated the main steel supporting beams.

“And before Christmas we will install new rain screens and bird mesh in all four louvred openings.

“Unfortunately, holdups at the bell foundry and at Nicholson’s yard have interfered with the scheduled return of the bells. This has now been put back to the New Year.

“We hope the bells and chimes will ring out once more sometime in February and the rededication of the bells should take place in the early spring.”