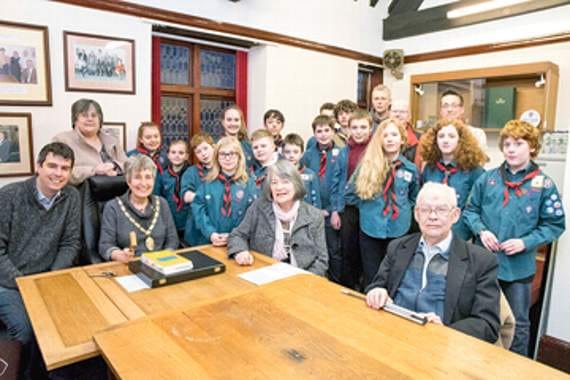 SCOUTS in Mitcheldean were given an insight into the democratic process with the help of parish councillors.

The 10- to 14-year-olds of the Second Mitcheldean Scouts  spoke to members of Mitcheldean Parish Council before holding a mock election at Mitcheldean Town Hall.

Scout leader Dan Tipp explained: “The scouts have to do a world challenge which, in fact, is quite a community-based thing.

“One of the things they can do is find out about the structures in their local community.

“We’ve come along to Mitcheldean Parish Council to find out more about local democracy.

“They had  an explanation about how national and local government works but for the bulk of the session they went into their patrol groups and had to come up with a campaign to get their candidate elected.

“Prior to that we did an exercise where we went around the village looking at what things needed to be improved such as the roads and poorly-lit streets.

“It was also an opportunity for the scouts to engage with the council and talk about the things they are aware of in their area.

“We had a great evening and the councillors supported the activity really well – it will form part of our #youshaped programme  of  youth-led and directed activities.

The main issues discussed were the dirt jumps, disability access to the play area on the playing fields and the lack of dog poo bins and bags.

“We hope to build on this in a follow up session with a solid proposal.”

Chair of the parish council Jackie Fraser said: “We’re really pleased that we have had this opportunity to work with the scouts.”