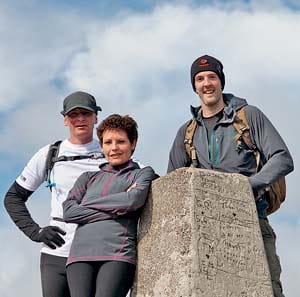 •Made it! Richard, Sue and Chris on top of Ben Nevis.

Back in December when she was coming to an end of her chemotherapy sessions she could barely walk a couple of miles, she said, "but now I am running up the peaks like a mountain goat.

"We are trying to raise community awareness in order to gain funds to reopen the Community Centre at Heywood, formally Splinters, so that it can be enjoyed by all ages, especially the local young people who were deprived of their youth centre by governmant cuts last year.

"I have been ably trained back to health since the end of January 2012 by  Chris Mellor, geo­graphy teacher, friend and collegue, and Richard Brookes, lead trainer of Asylum Functional Training and now also a good friend.

"We accomplished the three peaks in 19 hours and 55 minutes, starting on Friday July 6 into Saturday July 7. We utilised the driving skills of Stephanie Vinall, accounts graduate to chauffeur us from peak to peak."

The challenge involves climbing the highest peaks in Wales, England and Scotland – Snowdon, Scafell Pike and Ben Nevis – in 24 hours.

A highlight was climbing Scafell Pike in the dark with headlamps, "an unforgettable experience."

Sue said around £5,800 would be needed to refurnish the centre, which was stripped out when it was axed, and to bring it up to health and safety standards so that groups such as Scouts and Brownies could use it again.

"It needs to be a little focal point for the community, not an empty building."

She is currently setting up a justgiving page for contributions and would also appreciate ongoing help for running the centre again, particularly from CRB checked people.