The outlook for Christmas? Definitely merry 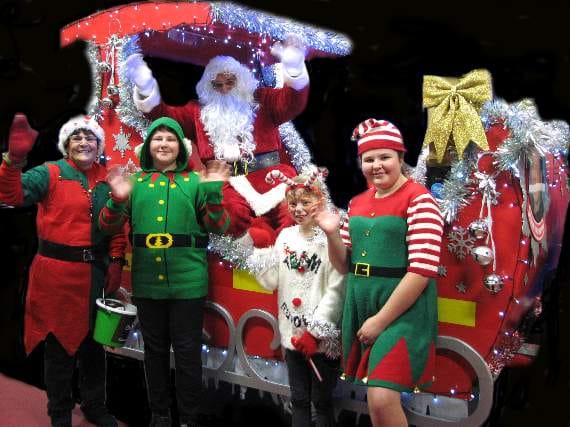 TV weatherman Derek Brockway wasn’t making too many predictions as he switched on the Christmas lights in Chepstow on Saturday (December 1).

The BBC Wales favourite told the large crowd in the High Street: “It’s too early to say what the weather will be like on Christmas Day – but wouldn’t it be fantastic to have snow?”

Wearing a bright Christmas jumper he told some groan-inducing seasonal jokes before he was joined by Santa – courtesy of Chepstow Round Table – and former X Factor contestant Russell Jones Junior for the countdown and switch-on.

Even the showers, which had been a feature of the day, abated for the switch-on which took place to great cheers.

The town made a day of the event with the High Street closed for a market and performances by Russell and local groups and artists.

Saturday also saw switch-on events in Cinderford and Coleford and the previous evening Caldicot got its celebrations underway.

The event in Coleford combined the switch-on with the popular Faddle Fair and attracted a large number of people to the town.

There was a parade featuring a number of local schools, which was headed by the sleigh created by Coleford firefighters.

The parade made its way to the town centre where the lights were switched on by Isabelle Manning and Cerys Pickett, assisted by the mayor, Cllr Nick Penny.

Berry Hill School was declared the best in the parade.

As well as a large number of stalls at the Faddle Fair, there was also Santa’s grotto to visit and there was a range of musical entertainment to enjoy including the Coleford Community Choir.

In Cinderford, the parade was led by the Harmony Twirlstars marching band as it made its way from the Lidl car park to The Triangle.

Santa switched on the lights before heading to his grotto where he gave out free gifts to children, courtesy of Cinderford Town Council.

Carol singers from Churches Together in Cinderford had a brass band accompaniment and visitors enjoyed rides on the funfair.

Woolaston might not have had a tree to officially light up, but volunteers decorated the former telephone box instead.

The telephone box, which now houses a book and toy library and pop-up shop, is regularly decorated for occasions such as Christmas, Hallowe’en and Easter.

Local volunteer Sue Anderson said: “The telephone box is a focal point for the village and the parish council has installed a Remembrance bench next to it.”

There were a wide variety of street stalls in Caldicot for the Friday night switch-on and Santa’s grotto in the former Store 21 shop which has a window decoration created by the 2nd Caldicot Scouts on a theme of the famous Christmas Day truce on the Western Front in 1914.

There was entertainment from local musicians and Churches Together in Caldicot were joined on stage by the Mayor of Caldicot, Cllr Oliver Edwards, Newport East MP Jessica Morden and Newport East Assembly member John Griffiths for a rousing rendition of The 12 Days of Christmas.

Santa stepped forward to switch on the lights but heavy rain appeared to have affected the electrics and it took three goes to persuade the full display of lights to come on.