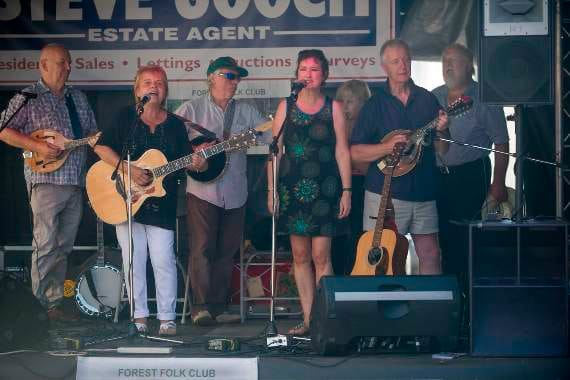 Around 1,500 attended the town’s annual music festival on Saturday, in one of the biggest turn outs to date, while another 1,200 chilled out to bands and singers on the main stage under the Clock Tower on Sunday.

“It was an absolutely brilliant weekend,” said town mayor and festival organiser Nick Penny. “We were a bit worried when there was torrential rain on Friday, but come the weekend we couldn’t have asked for better weather, and the music was just great.

“I suspect the pubs did rather well as fans slaked their thirst, and it was great to see so many people coming into the town centre and businesses doing a great trade.

“I think Saturday was certainly one of our biggest crowds since we restarted the event in 2015 and the whole festival had a fantastic family atmosphere, with everyone having a great time.

“The feedback from people has been really positive, with the dedicated team of around 20 stewards and volunteers receiving lots of pats on the back.

“They work really hard over six days under the leadership of Graeme Terrell and Nicky Holland, from the stages going up to coming down, and some of them measured that they walked 30km a day over the weekend looking after the crowds and shaking the collection buckets, so it’s a massive thanks to them.

“The bands and performers all loved the event, and it was an absolute pleasure to welcome back BBC Folk Award winners Oysterband as Saturday’s headliners with their folk rock/punk sound, who came here in 2002 and have gone on to become a stellar attraction,” added Cllr Penny.

“They really brought people flocking into town, with some coming from as far away as Shrewsbury to see them. And it just rolled into Sunday night with the square jumping to day two headliners, jive and swing band The Jive Aces, who created a family party feel to bring the festival to a fitting end.

“People of all ages were dancing and jiving to the UK’s No 1 jive and swing band, including one man in his late 70s, which was great.

“And a special mention should go to some of the local bands who set the main stage alight, such as Bxly and altenative rockers Crystal Bloom, plus the Forest Warriors, with their ‘ragatastic chilled vibes’, fronted by festival compere Max Freedman-Fisher.

“I think the diversity of music on the four stages stood out for me, from the main stage bands, to acoustic acts on the Angel Hotel stage, local bands on the St John Street stage, sponsored by Music Industry Services, and folk and roots acts on the Newland Street Stage, sponsored by Steve Gooch estate agents.”

There was also plenty going on for youngsters, including mask making, Forest Rocks pebble painting, Punch and Judy and African drumming workshops.

“What makes the event so special is it’s a community festival in the heart of the town centre, under the Clock Tower, and it’s just great to see the town come alive like that,” said Cllr Penny.

“We don’t charge, we ask people to donate, and although the bucket collection raised £3,288 towards next year’s event, we still need more cash to start planning for 2019, so if you forgot to donate, please go to https://www.gofundme.com/CMF2018 or drop in a donation at the Coleford Tourist Information Centre.

“And we’re always looking for sponsors, so anyone who wants to get involved next year should email us at [email protected].”