‘You’re going to kill off the sheep’

By Forest of Dean and Wye Valley Review
Wednesday 10th August 2016 7:08 am
Share 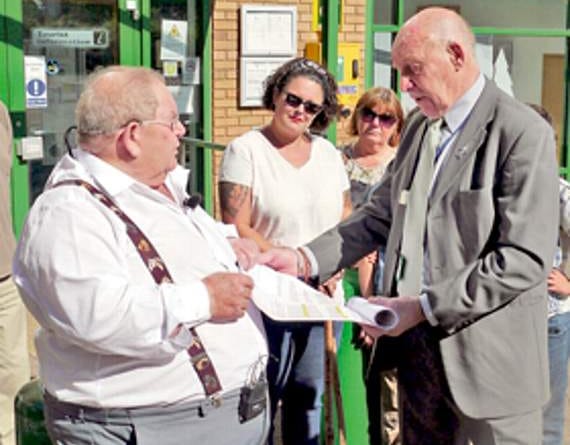 •Commoners Association secretary Mick Holder (left) presents a letter to Cllr Terry Hale objecting to the introduction of a Public Spaces Protection Order – a move, he says, which could lead to the end of commoning.

FOREST of Dean commoners are fighting back in the battle to keep alive the right to free-grazing for sheep. Accusing the district council of “using a sledgehammer to crack a nut,” they say the introduction of a Public Spaces Protection Order could ultimately end the tradition.

The order is being considered by local councillors for the village of Bream.

However, members of the Commoners Association say they believe there are other means to address the problems of straying sheep in the village. They claim that by introducing blanket legislation they could end sheep commoning.

Accompanied by members and friends, around 30 commoners joined the Association’s secretary Mick Holder when he presented a letter to Cllr Terry Hale, the district council’s cabinet member with special responsibility for the area.

The commoners offer to work with Cllr Hale and the Forestry Commission to put into action other ways of tackling what they believe to be a “relatively minor problem.”

Mr Holder said: “The problems in Bream seem to relate to one badger who is not a member of the Association. There are other ways to tackle this problem but the task group decision to recommend banning sheep is very extreme and sets a dangerous precedent.

“Sheep have been here for centuries yet the council seem intent on ending the tradition. A few councillors seem to want to stir things up instead of trying to solve problems.

He added that commoners needed the support of the council to preserve and support the tradition. It was, he said, disappointing they had done nothing to help.

•The number of sheep in the Forest is said to be around a third of the level of that before the Foot and Mouth epidemic of 2001.