All revved up to fight rural crime 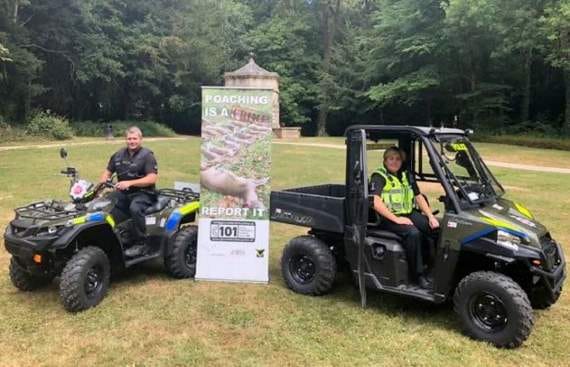 PC Ashley Weller and Inspector Karen Ellis testing the new all-terrain vehicles which will help in the battle against rural crime.

A NEW police team has been praised for helping to cut the region’s rural crime, while the rest of the country saw a big rise.

Gloucestershire Police’s Rural Crime Team helped reduce the amount of stolen property and damage in the county by 12.7 per cent from £1.7m to £1.4m, as the rest of the UK countryside saw crime jump by 13.4 per cent.

Officers say they will allow them to reach difficult to access areas more quickly, to stop the likes of poachers, badger baiters, hare coursers and thieves in their tracks.

The insurance company’s report reveals that items most commonly targeted by thieves in Gloucestershire in 2017 were quad bikes and all-terrain vehicles, machinery and oil.

“Farmers are now combining medieval methods with high-security single access points to fortify their farms against criminals using 4x4 vehicles to get onto land to commit crimes and evade police.

“Adapting centuries-old security with hi-tech solutions is already proving successful in keeping at bay thieves who don’t fear being caught on camera and have the skills to overcome electronic security systems,” added Mr Bryant.

“The threat of becoming a victim of rural crime, and regular reports of suspicious characters watching farms is causing high levels of anxiety amongst farmers who know their rural location makes them vulnerable to attacks.

“Our advice to people living and working in the countryside is to regularly evaluate your current security measures, making improvements where necessary, remain vigilant and report any suspicious activity to the local police and local farm watch schemes.”

Inspector Karen Ellis of Gloucestershire Police said: “We are very grateful to Cotswold Farm Machinery and Logic and Ace ATV for the loan of the high-powered vehicles and equipment to help our fight against rural crime.

“Our rural crime officers are being trained to use them off-road so they will be available anywhere in the county as required.

“We are confident that they will make a significant difference to our ability to catch offenders and put a stop to the crimes they are committing, including poaching of deer and fish, hare coursing, illegal off-road motor and quad bike racing as well as rural burglary and the theft of agricultural machinery.

“We will be able to go anywhere, during any weather conditions, and this greatly improves our chances of catching criminals red-handed, especially during this year’s anti-hare coursing operations throughout the summer (Operation Firefly).

“The vehicles could also be used to help locate missing vulnerable people in remote locations.”

Martin Surl, Police and Crime Commissioner for Gloucestershire, said: “Policing a county as diverse as Gloucestershire requires different approaches to getting officers where they need to be.

For more information and advice on how to beat rural crime see www.nfumutual.co.uk/ruralcrime