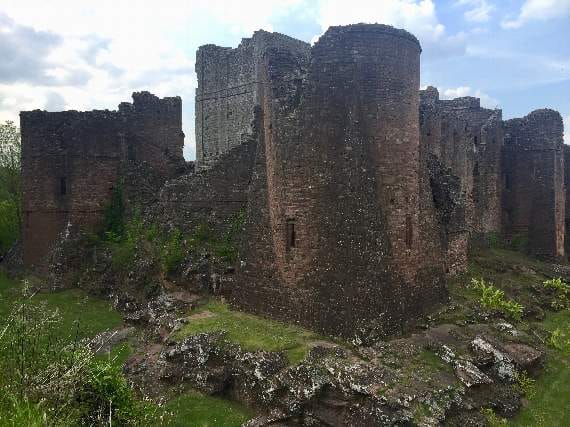 HERITAGE bosses have sounded the alarm over illegal treasure hunters who go under cover of darkness to dig up historic sites.

And now English Heritage has called on the public to report any suspicious activity around ancient monuments and battlefields to stop illegal detectorists ‘robbing our past’.

Police said ‘nighthawkers’ were captured on CCTV detecting at Goodrich Castle on Sunday, October 13, after arriving in a BMW car around 7pm.

The Norman castle, which is managed by English Heritage was founded, in the early 12th century and is one of the finest and best preserved of all English medieval castles.

It was owned successively by the Marshal, Valence and Talbot families, many of them important figures in war and national politics, and was besieged and captured by the Cromwell’s forces during the Civil War.

Heritage chiefs say ’nighthawking’ is a growing threat across the country, with the likes of the Battle of Hastings battlefild among locations targeted, alongsidee medieval castles like Goodrich and Roman forts.

“Illegal metal detecting robs us of our past,” she said.

“Once items are spirited away they can never be replaced, and the evidence of those who went before us is lost forever.

“We are working closely with Historic England and local police services to combat this form of heritage crime.

“We are now asking the wider community to act as our ‘eyes and ears’ and to report any suspicious activity on or near English Heritage sites to the police.”

Last year three metal detectorists were jailed for a total of 23-and-a-half years for unearthing a buried Viking hoard in northern Herefordshire and selling their discoveries on the black market.

A fourth member of the ring was given a suspended prison sentence.

Although the site where they found the treasure was not an ancient monument, experts expressed dismay at the loss of a treasure of national importance.

“We may never see or fully understand the objects taken or damaged because they have been removed from their original sites with no care or record as to their history or context.”

Old Sarum in Wiltshire, the site of Salisbury’s original cathedral, has been attacked multiple times, and Wiltshire Constabulary have appealed for witnesses.

Most of the more-than-400 sites in the care of English Heritage are unstaffed and free to enter. The charity is reviewing its security arrangements.

Metal detecting has been a hobby for many since detectors first became available on the mass market in the 1970s.

English Heritage said that in 2019 there were 12 recorded incidents of illegal metal detecting at its sites, with four sites alone targeted in December.

It said that “the sheer scale of the attacks, with up to 75 holes found to have been dug at each site” was of particular concern.