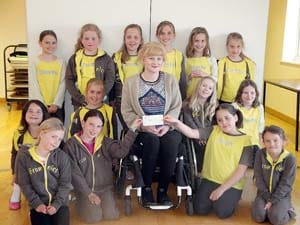 WOOLASTON Brownies have presented a cheque to its an ex-member amid fears the unit could close if a new leader. can't be found.

After raising £100 packing bags in Tesco, as part of their disability awareness badge, the Brownies had to support a disabled charity and so chose to support ex-Brownie Ashleigh Harris who broke her back in a horse riding accident and is in a wheelchair.

Sixteen-year-old Ashleigh, of Woolaston, told the group how life has changed for her and of the activities she is still able to do like canoeing and abseiling.

She also plays wheelchair basketball for the South West and is hoping to take part in the 2020 Tokyo Olympics and the money will help replace wheels for her sports chair.

Current leader Anita Mott, of Stroat, said she is stepping down after 39 years to become an assistant as she is deemed 'too old' by Girl Guiding UK.

She said: "This thriving unit, which celebrates its 40th anniversary next January, will close unless new volunteer leaders come forward. I started the unit in 1974 with Irene Kynaston and over the years there have been many volunteers with members from Woolaston, Alvington, St Briavels and Aylburton. We need somebody who is willing to give up their time.

"The girls recently made posters asking for a new leader with comments like 'please help us', 'we don't want to close' and 'we love Brownies'.

"Because of the lack of leaders in Woolaston we have lost Rainbows, Beavers, Cubs, Scouts and youth clubs. It would be a great shame to lose the Brownies as well when there is no shortage of girls wanting to join."