Bread, cheese and a sermon at St Briavels 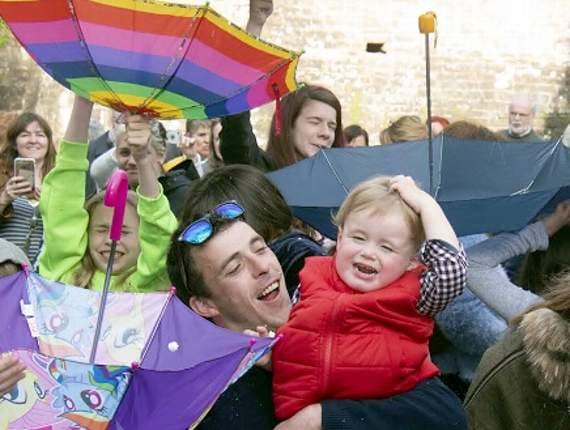 A young member of the crowd wonders what has hit him.

THE Vicar of Newnham, Rev Dr Rob James, travelled to St Briavels to give the traditional WhitSunday sermon for the ‘Whittington Purse’.

He later blessed the bread and cheese which was thrown to the waiting crowd in a village tradition that goes right back to the 13th century.

The village’s Whittington Purse sermon has been preached since the early 1630s, after William Whittington left money in his will for a priest who was not the Vicar of St Briavels to preach on Whit Sunday.

Rev James said: “I’m honoured to have been asked – the chap who set it up clearly didn’t like the vicar at the time.”

The theme of the sermon was Pentecost, which Christians regard as the birth of the Church, and “the love of God through Jesus.”

Rev James was presented with £1 6s 8d by Rev Bob Simpson after, in line with Whittington’s will, the crowd cheered his sermon.

There was also music from Parkend Silver Band and a reading about Pentecost given by parishoner David Rees who will be ordained in a few weeks.

Rev Simpson said: “The sermon began to be preached in 1632 and the distribution of bread and cheese goes back twice as long as that.”

Cubes of bread and cheese were thrown from the Pound Wall by the Keeper of the Wood, Gerald Cres-wick, and his sister Margaret Saunders.

People used umbrellas, coats, hats and their hands to catch the bread and cheese as it was launched from the 12ft high wall opposite St Briavels Castle.

Mrs Saunders and her daughters prepared 12 loaves and six kilogrammes of cheese for the ceremony.