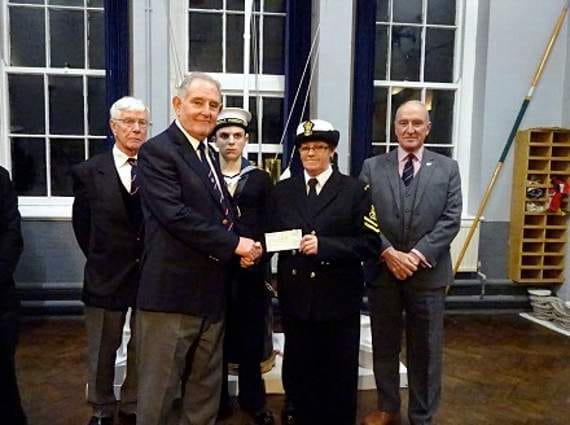 SEA Cadets were boosted when former Royal Navy sailors visited their base and presented them with a cheque to support their work.

A spokesman for the Chepstow and District branch of the Royal Naval Association said they had always maintained strong links with the Forest Sea Cadets’ unit based in Lydney.

RNA members joined the High Sheriff of Gloucestershire, Charles Martell, Coleford mayor Cllr Nick Penny and Lydney mayor Cllr Bob Berryman attended a parade at the cadets’ annual inspection on Wednesday, March 6, and were given a tour of the unit, known as ‘Training Ship Royal Forest’, and watched a number of demonstrations.

The Sea Cadet organisation is not funded by the Royal Navy and depends on local charities and businesses to support its activities.

Therefore, it was very grateful to receive a cheque from the Chepstow RNA.

Chepstow RNA president, Commander Christopher Wilson, said: “It is important to encourage the activities of this most worthwhile group who instil such strong virtues in their young charges that prepare them for their life ahead.

“Once naval service has been experienced, life is never the same again. The bonds that are made and the banter alone are worth their weight in gold.

“Within the RNA are thousands of like-minded people across the world who enjoy getting together and providing help and support to each other, the Naval Service family and local communities.”

The Chepstow Royal Naval Association meets in the Conservative Club, Moor Street, on the second Thursday evening of each month.