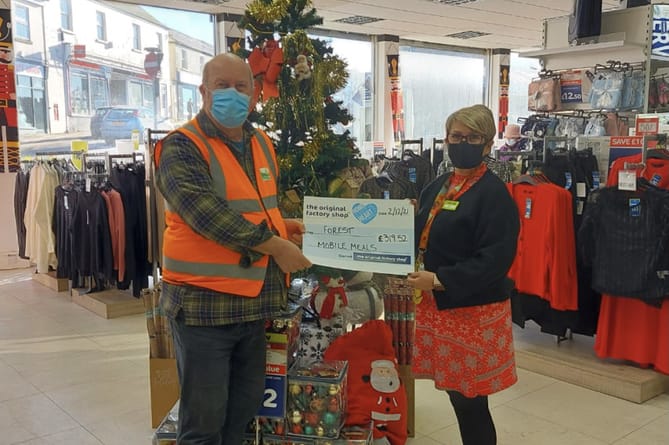 A FOREST charity which delivers meals to elderly and vulnerable people has received a cash boost from customers of a Cinderford store.

A cheque for nearly £320 was presented to Forest Mobile Meals at the Original Factory Shop in the town.

Store manager Ally Workman said: "We’re really excited that we and our customers have helped raise £319.52p for Forest Mobile Meals which is our chosen charity.

"What they do is invaluable for the local area and we’d like to think that this effort will go some small way to supporting their work in the community.

" As a company, this year we have decided to support local charities in our towns "We asked our customers through Facebook which charity they would like us to support.

"The money was raised by the local community who put money in a charity box and from donations made to the store’s charity fund by swiping their members’ card or buying a carrier bag.’’

Forest Mobile Meals is a Cinderford-based charity established just before lockdown in early 2020.

The service allows many elderly, sick, self-isolating or vulnerable people to remain living in their own homes.

Hot meals are prepared at the charity’s kitchens in Foxes Bridge and delivered by volunteer drivers five days a week.