Evacuation as the bomb squad called 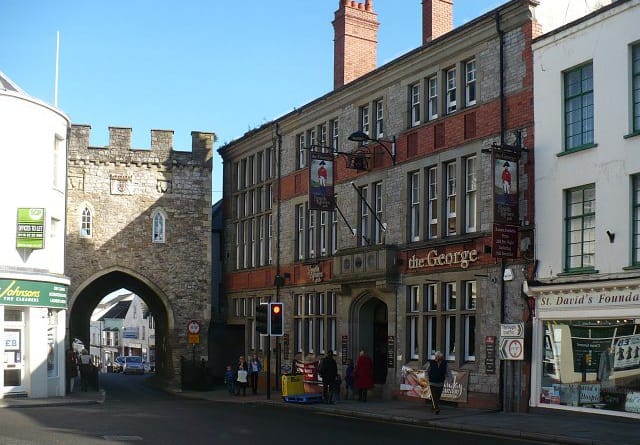 A ‘suspicious device’ was found in the George Hotel in Moor Street, Chepstow (Robin Drayton/Geograph )

POLICE cordoned off part of a town centre street for some four hours on Monday afternoon after the discovery of a ‘suspicious device’ in a hotel room.

The bomb squad were called in, but the ‘explosive’ item found at the historic George Hotel in Chepstow’s Moor Street was nothing more than a small firework left behind by a previous guest.

Police urged everyone to quit the premises and nearby shops and put a 50m cordon around the building after the alarm was raised shortly after 1.30pm.

“It had no writing or label on it and when it was discovered it was called in to the police who advised us to evacuate the building and they called the bomb squad to be on the safe side.”

Gwent Police said in a statement during the incident: “We received a call around 1.35pm on Monday, February 21, reporting that a suspicious device had been found at a building in Moor Street, Chepstow.

“Officers are attending and a 50-metre cordon has been established.

“Temporary diversions are in place and some properties have been evacuated as a precaution.

“Specialist trained personnel from the army’s explosive ordnance disposal unit (EOD) also attended to examine the object and the incident is ongoing.”

Chief Superintendent Tom Harding also said: “I’d like to thank the community for their patience and understanding at this time. We’re working with our partners to bring this incident to a safe conclusion as quickly as possible.”

The police later said they had lifted the cordon around 6pm after establishing that the “device” was not dangerous.

The closure saw buses unable to use the nearby station on Thomas Street.

One resident posted: “Better to be safe than sorry… we’ve had two gas explosions in Chepstow, so I guess until they knew what they were dealing with, it’s better that it was cordoned off.”

But another said: “Talk about a massive overreaction.”

The George Hotel building next to the town gate dates from 1899, it replaced a coaching inn dating to the 1620s destroyed by fire in 1896.