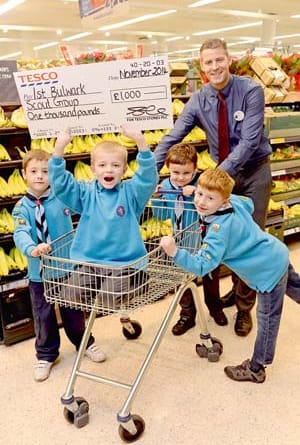 •Cub John-Terry King, aged six, waves the cheque for £1,000 as he is wheeled out of the Tesco store in Chepstow by manager David Kingsland and friends, from left, Kanzey Morris, six, Murry King, seven, and Daniel Powell, seven.

TWO Chepstow services are each £1,000 better off – thanks to Tesco.

St Pierre Ward at Chepstow Hospital and the 1st Bulwark Scout Group received the donation after winning a Helping Hand competition from the store.

After floods of nominations poured in from residents and shoppers, the store had to decide which causes they felt deserved some extra help.

Store manager, David Kingsland said: "Although it was hard to pick the winners from all of the entries we received, I'm really pleased that we've been able to award both of these organisations with donations of £1,000 as I know how much it means to both of them and what a difference it will make."

The winners were invited to the store where they were presented with their cheques.

The Scouts will be putting their donation towards the cost of renovating their 50-year-old 'HQ' based off Pembroke Road, in Bulwark, and the Chepstow Hospital will throw a special Christmas party for their patients.

Ward manager of the St Pierre Ward, Karen Richards, said: "On behalf of the staff and patients on our ward, I'd like to thank Tesco for this wonderful donation. We will be using the money to put towards a Christmas party for the ward, presents for our patients and some new Christmas decorations.

"This time of year can be difficult for people to be in hospital and away from home and their families so while our patients are with us we want to make the ward as festive as possible. I'm sure the party and the decorations will give a real boost to our patients."

David added: "It was a pleasure to meet Hilary and Karen and hear more about what their donations will be used for. It's great to know that the money will benefit so many people in the Chepstow community."