Foodbank hoping to be a cup winner 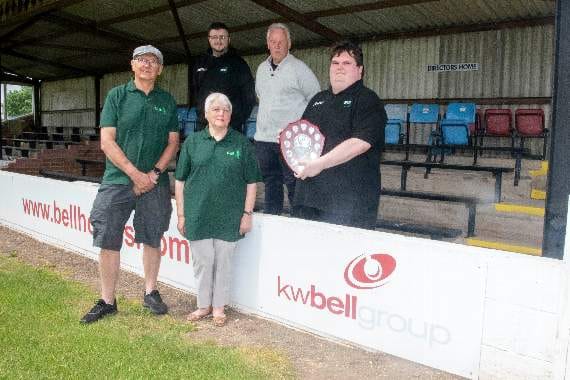 FOOTY fans cheering on their teams at a tournament in Cinderford can also help local families facing a food crisis.

The Severn Sport Shield is being held at Cinderford Town’s ground later this month and the Forest Foodbank is the nominated charity.

The Foodbank will have collection points at each of the three games that make up the tournament organised by the Severn Sport website which is dedicated to football in the county.

The tournament will feature Cinderford Town from the Southern League and Hellenic League outfits Newent Town, Fairford and Tuffley Rovers.

The semi-finals will take place at Cinderford’s Causeway ground on Tuesday, July 13 and Wednesday, July 14 with a 7.45pm kick-off.

It is followed by finals day on Saturday, July 17 with the third place play-off at noon and the final at 3.30pm.

Each will have collection points for the Foodbank and it is hoped generous fans will bring along an item or two to donate.

The Foodbank has helped to feed 826 adults and 544 children since the beginning of the year, said project leader Yvonne Wood.

She added: “We have a list of the items we particularly need and that includes tea bags, which we are desperate for, shampoo, shower gel and snacks.

“It’s great that Severn Sport and Cinderford Town have agreed to support the Foodbank and we hope people will bring along items to donate.”

She said the Foodbank has had to change the way it operates with deliveries to families in need rather than them going to centres in Coleford, Cinderford and Lydney.

In the autumn it is hoped that the Cinderford distribution centre can act as a hub that people can go to.

There are now an increased number of drop-off points for donations and these can be found at Co-op in Lydney and Coleford, Tesco Lydney, Kevin’s Butchers Mitcheldean, Vale Butchers Drybrook, Ruardean Post Office, Blakeney fish and chip shop, Forest View Primary School in Cinderford, Eskimarket in Coleford and Main Place, Coleford.

Ryan Butler, of Severn Sport, said: “We were passsionate that we wanted charity involvement – the last 18 months have been difficult and they are such a vital part of life and society.

“The Forest Foodbank have worked with Cinderford Town and after having a chat with Yvonne my mind was made up to support the Foodbank.

“We’re encouraging everyone to bring an item to donate so we can make a difference on the pitch and off it.”

The Shield comes to The Causeway as celebrations get underway to celebrate Town’s centenary which were held over from last year.

Ryan added: “Cinderford have been booked in for two years and we are proud to be part of their centenary.

“(Cinderford chairman) Staurt Tait has been fantastic helping us put it all together.

“Gloucestershire is football probably at the best standard that we’ve seen since we started.”

Cinderford Town commercial manager said the team’s curtain raiser to the season would be against Cheltenham Town on Saturday, July 10.

He added: "The club would like to thank all our sponsors for their continued support."