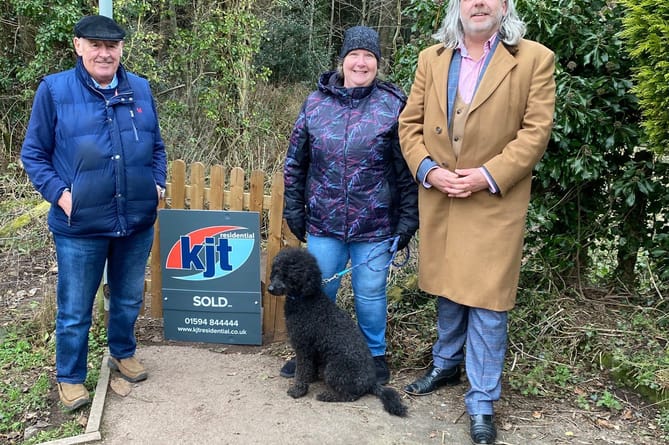 A NEW gate has been installed to give people access to woodlands while keeping wild boar out of a play area.

Local estate agent Dave Toombs, of Lydney-based agents KJT, stepped in to fund the new gate at Primrose Hill in Lydney in a project initiated by the Friends of the Mesne community group.

Friends of the Mesne spokesman Pete Webb explained: “We were set up when the boar invaded the play area on Primrose Hill mesne not once but several times.

“They decimated the whole grass area and dug up and ate daffodil bulbs that had been planted by members of the community.

“We tried to get the town council to fence off the wooded area to prevent further attacks and the forestry to no avail.

“We then had reports of the boar coming onto the hill through the gate in the dip which has been used for generations of people to access the hill for work and pleasure.

“The gate was nothing more than a pallet and was in serious need of repair.

“We, as a group, decided to fund a replacement, so we ordered a locally-made gate, obtained the posts and ironworks locally and commissioned local carpenter Thomas Penning to install the unit.

“I mentioned this to Dave Toombs who promptly offered to fund the project to put something back into the community.”

The group’s latest project in conjunction with the town council is to install a heart defibrillator with the plan for it to be in an old red phone box.