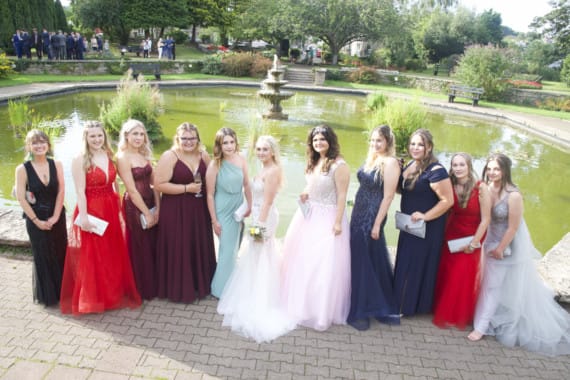 A GROUP of mums stepped forward to save a much-anticipated prom after a school had to take the "impossibly difficult decision" to cancel the end of year celebration.

Teenagers at the Dean Academy in Lydney had already faced the possibility of losing the marker when the original venue became unavailable.

The school then said it would organise a get-together for Year 11 pupils but had to cancel in the face of rising Covid cases in the town.

But knowing how much the youngsters had been looking forward to the prom after a year disrupted by the pandemic, mums Amanda Skidmore and Kerri Greenhorn decided to organise an event themselves.

Amanda said: "We thought: ’Let’s do these kids a prom because they need something as they’ve had a really bad year.

"A lot of people had also bought dresses and suits, so we set up a Facebook page to see what they wanted."

Mrs Skidmore said she "totally got" why the school had decided to cancel the event.

They managed to book St Briavels Pavilion and the prom took place last Thursday (August 13) - just hours after the teenagers had picked up their GCSE results.

Mrs Skidmore has a personal link to the venue as her late mother-in-law, Jill Skidmore, was a volunteer there.

Mrs Skidmore said: "The pavilion is a lovely venue and they had a brilliant time.

"We had a disco with props and it was a fun evening."

The evening started in the traditional way with the group meeting in Bathurst Park with family and friends for photographs before travelling to St Briavels.

He said: "It is with great regret that I must inform you we have taken the impossibly difficult decision to cancel this year’s Prom.

"At all points this year we have had to manage risk and be reactive to the situation around us and unfortunately, despite the easing of restrictions, cases locally have soared.

"We were desperately hoping we might be able make it work but as cases have risen rapidly, we cannot balance the risks of the event against the benefits.

"We had hoped to hold a small Prom on site here at school to mark the end of your time at The Dean Academy, but I cannot in good faith move forward with that plan knowing that it may put the health of our community at risk.