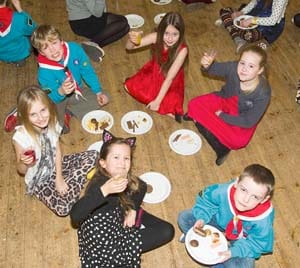 AROUND 70 children enjoyed their Baden-Powell Christmas Party as part of the finale of the Brownies 100th year birthday.

Each unit provided entertainment with the theme of Christmas or Baden-Powell – the founder of scouting.

Brownie leader, Becky Meek said: "We wanted to bring all the Baden-Powell sections together to have a Christmas celebration. The beavers did a comical, but informative, performance about Bertie the Beaver. Guides acted out Twas The Night Before Christmas told by Baden-Powell. Ruardean Hill Brownies sang Jingle Bells. My unit Ruardean Brownies performed Wake up to Christmas.

"Party food was supplied by Ruardean Brownies – thanks to Pauline Davies, Alison Lewis and George Jayne for sorting out the food. Division commissioner Jane Howells stepped in for me at the last minute to help run the event. All units seemed to have a nice time and several Brownies told me that it was nice to see their friends in other units."