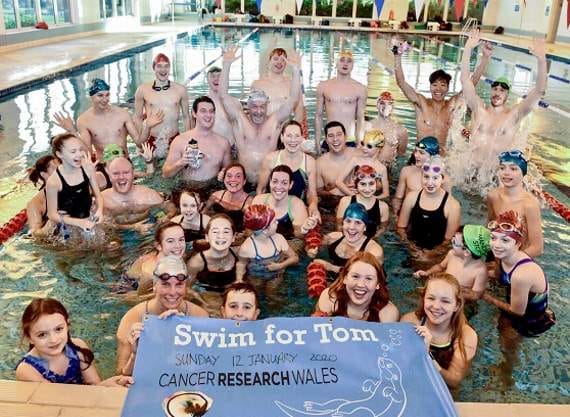 Hundreds took the Swim for Tom plunge on Sunday in aid of Cancer Research Wales.

MORE than 500 swimmers from young children to pensioners made a huge splash covering 583 miles in tribute to a teenage boy.

The volunteers took the plunge in memory of keen Wye Valley swimmer and rower Tom Walker, who died suddenly in 2018 aged 13 from leukaemia.

His mum and dad Tim and Debbie and sisters Holly and Emily organised the second Swim for Tom 12-hour swimathon at Monmouth School for Girls’ pool on Sunday (January 12), which also saw four other satellite venues used over the weekend.

And this year’s event has already raised more than £12,000 for Cancer Research Wales.

The main 12-hour event ran from 9am to 9pm, with up to eight swimmers using each of the lanes in hour-long stretches.

Some swimmers, including GB Olympian Tom Haffield, completed lengths at other venues, which all contributed to the tally.

“Swim for Tom is about competing with each other to reach a single goal and not against each other.

“Many people of all abilities pushed themselves to swim further than they had ever done before, including many beginners.”

Tom who lived near Chepstow, was a pupil at Monmouth School for Boys and a member of the town’s Monnow Swimming Club, which trains at the girls’ school pool.

Since Tom’s passing, his family have led efforts to raise more than £100,000 for a research fund.

Children at Monmouth Schools Pre-Prep and Nursery got this year’s Swim for Tom underway, chalking up almost 500 lengths on Friday afternoon.