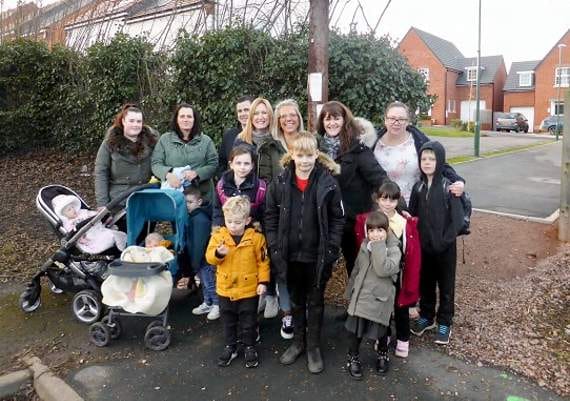 Parents and children on the path they have been using to get to St John's Academy in Coleford.

PARENTS who walk their children to school from a new estate have launched a petition after learning that a housing association may block their route.

Concerned mums and dads of youngsters attending St John’s CofE Academy in Coleford say their walk of a couple of minutes could be turned into a 20 to 25-minute trek to the top of the estate and along a busy main road if their way is barred.

Matters came to a head last week when parents saw workmen measuring up the opening that links a path from the Thurstan’s Rise estate with the Oakfields cul-de-sac, yards from the school.

The workers said boundary owners Two Rivers, who have houses and flats in the cul-de-sac, were going to fence it off following complaints from tenants.

But Thurstan’s Rise residents say their deed plans clearly show the path constructed by David Wilson Homes (DWH) in 2016 leading on to the ‘access’ way, and have presented a 150-name petition protesting any closure to the town council.

Mum-of-two Caroline Vaccaro-Denton said: “We bought our home here so our children could easily get to school, but now we’ve been told they’re going to fence the access off.

“There are a lot of children that go to the school this way. The parents include disabled and single mums, and we’re really upset about this. Some of us are livid.

“It will mean going to the top of the estate and along the main road in a big loop, which will take up to 25 minutes with kids and is far more dangerous.

“The workmen said some Two Rivers residents didn’t want us walking through there, but we don’t see what the problem is. It’s just for a few minutes, twice a day.

“If they have a problem with mopeds and stuff, then why don’t they put in a zig-zag gate that buggies can access, but nothing bigger. We’ve moved our two children here from another school, and we wouldn’t have bothered if we’d known the path was going to be blocked.

“It will actually be quicker for parents to put their kids on the bus and go to school in Monmouth, which is ridiculous.

“People have been saying on Facebook they want to stop dog fouling, which is nothing to do with us, and parents parking, but this is only going to make the parking worse, as more parents will drive.”

Fellow mum Danielle Robinson said: “It’s not just the school, it turns any walk into town into a major trek for people on the estate, who include many retired people.”

Mum-of-three Lisa Baynham said putting in a turnstile gate would stop mopeds getting through, while mum-of-two Vicky Stephens, who has two children Jasmine and Joshua, at the school, said lorries travelled to and from Stowfield Quarry along the main road, and it was dangerous to walk children along it.

Coleford town mayor Cllr Nick Penny has taken up the issue on behalf of parents.

“Two Rivers assure me that at this stage no formal decision has been taken to close the ‘gap in the hedge’,” he said this week.

“I have asked for reassurance that prior to any decision being taken that formal consultation is carried out with the residents and that the town council also be involved.

“It seems strange that there is a fully accessible path with street lighting in two places on the Thurstan’s Rise site, but there has been no formal connection beyond the site boundary to areas in Oakfields and Meads Close where the paths lead.”

St John’s headteacher David Le Templier said: “I have been made aware that Two Rivers intend to close the walkway between Oakfields and the Thurstan’s Rise estate, however the school have not yet been involved in any consultation about the proposals.

“Our primary concern is the safety of our children and our families, travelling to and from school and we hope this is considered by all parties moving forward.”

Martin Payne, DWH technical director, said: “We are in conversation with stakeholders regarding options for the path. It’s our hope that a solution can be reached imminently that will establish a formal access route from our development, connecting it with the existing council path.

“We have fulfilled our planning obligation and built the footpath up to our site boundary. We are now waiting on permission from third parties to make connection with the existing council path.”

Two Rivers' spokeswoman Liz Reeson said: "We are working with David Wilson Homes to establish a formal path between Thurstan's Rise and Oakfields. "We see the sense in creating this access, but are mindful of the potential negative impact on our residents who live close to the path, some of whom are elderly and vulnerable. We will, therefore, be looking to include measures to reduce that."We hope that formalising this access will help to ensure the safety of residents by offering an alternative to walking along the busy main road."