Park team gets its skates on 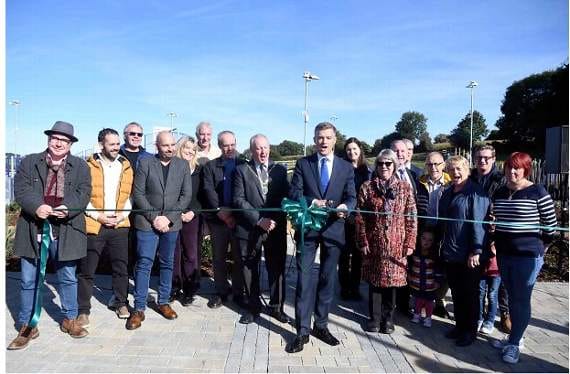 Forest MP counts down to the ribbon cutting.

A NEW park and memorial garden has been offiically opened in Coleford, two months ahead of schedule.

And while Bell’s Field was originally bought by Coleford Town Council to ensure it did not become a housing estate, much of the money to pay for it came from contributions developers have had to pay as a condition for getting planning permission for homes elsewhere in the Forest.

The development includes a skatepark, a bike pump track and multi-use games area.

The bench was crafted by Coleford-based carpenters Tudor Rose from Lydney Estate oak.

Mayor of Coleford Cllr Nick Penny said: “Work started on site in February this year with a planned completion in November.

“I am pleased to say, in the interests of our community, we have been able to open this two months ahead of plan.

“This park has been designed to provide amenities for the people of Coleford – people of all ages and all abilities.

“It has been purposely designed to be accessible with new entrances and gently sloping paths around the site.

“It is up to the community to put your touch to the scheme and to work with us to make it something Coleford can be proud of in decades to come.”

The park was officially opened by Forest MP Mark Harper who said: “This was a team effort: it was the town council, it was all the professionals and it was all those who contributed on a voluntary basis to make this work.

“I hope that every single person in the community gets full value from it so the hard work by the team is reaped by the community on whose behalf they were working.

“A big chunk of the money came from developer contributions from homes built elsewhere in the distict.

“I know not everyone is fantastically pleased by housing development but positive things can happen if it is done well – the money is used for the community, you get extra homes for people but you also get an improvement in facilities

“There are houses around this site whose environment will be improved because drainage has been improved, flooding will be reduced,”

After cutting a ribbon, Mr Harper cut a celebration cake made by Icing on the Cake of Blakeney.

The bench and garden was dedicated by Rev Chris Howell who said: “May this bench and Garden of Rest serve as a constant reminder of the sacrifice of so many and of the futility of warfare and conflict in its many guises.”

Coleford town councillor Nicky Holloway laid a posy of poppies and Last Post was sounded by bugler Rifleman Nathan Clark of 1 Rifles at Beachley with a salute by Lt Col Matthew Ford.