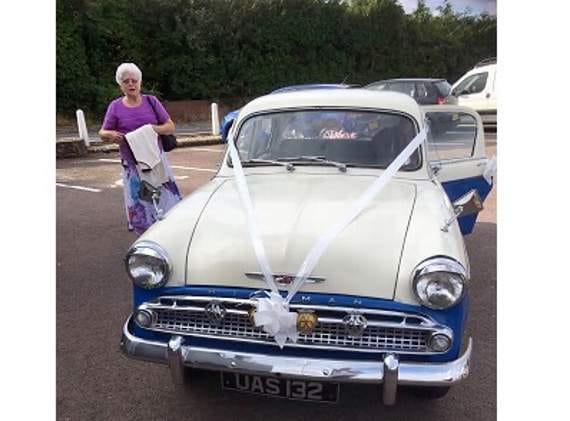 Mrs Griffiths with the 1958 Hillman Minx which took them to their anniversary celebration.

A FOREST couple were whisked back to the days of their youth, courtesy of their family and a 1958 Hillman Minx.

Terry and Dorothy Griffiths celebrated their diamond wedding anniversary at the White Hart in Newnham and the special transport was laid on by their family.

The couple, of Holcot Road in Coalway, were married at St John’s Church in Coleford in August 1958.

Mrs Griffiths, who is 79, said: “In those days youngsters used to collect in the centre of Coleford in the evenings.

“He came out of a pub on Gloucester Road with some mates, took hold of me and said: ‘This is the girl I’m going to marry.’

But four years later, the couple walked down the aisle of the parish church and they have had 60 happy years – although Mrs Griffiths added: “If anyone tells you they’ve never had a cross

word, they are lying.

“I’ve just always felt very comfortable with him, we just fitted together.”

Mr Griifths, who is now 83, was a miner and worked in most of the Forest pits except Eastern United and later worked on building sites.

He did try factory work but decided he didn’t like being indoors.

Mrs Griffiths worked at the pin factory in Whitecroft which turned out to be a stroke of luck when she got married.

“We were on the bus talking about the wedding and the driver offered to pick people up because nobody had cars in those days.

“He went around the district picking up people for the reception at Scowles School but they had to walk up the hill because the lane was too narrow for the bus.”