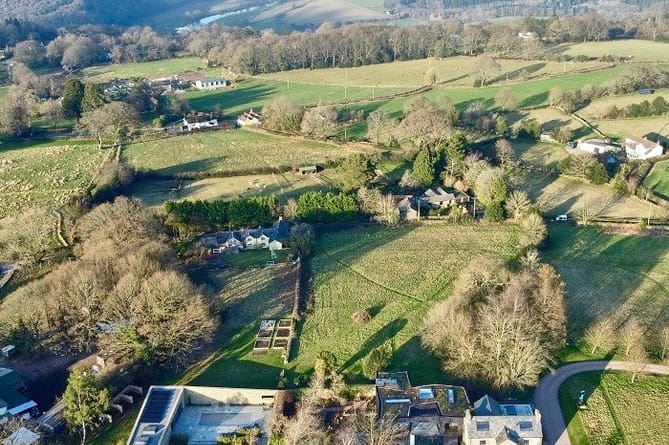 A 10-YEAR architectural project marrying a Georgian farmhouse with a ’Space Age’ extension above the Wye Valley has been named ’House of the Year’ by the Royal Institute of British Architects.

’The House on the Hill’ on St Briavels Common was revealed as the winner on the Grand Designs TV show on Wednesday night (December 8) - a second national triumph for the owners and the architect having already scooped the prestigious Manser Medal for the best completed house in the UK.

Alison Brooks led the redesign of the stone house into a home and a gallery of Indian and African sculpture.

And show host Kevin MacLeod described it as: "Half traditional Georgian farmhouse, half Space Age monolith with gleaming dark walls, jagged edges and mirrored surfaces. Inside it’s a temple to airiness and light."

On one side of the farmhouse, three floors have been hollowed out into one gallery space with soaring ceilings, there are also two bedrooms and a study on this side of the property.

The space flows into the modern extension with no separation where there is an open plan kitchen, dining and living space, two more bed rooms and an office with a balcony.

McCloud described it as a collection of angles and skewed geometries which take you into new encounters and spaces throughout the building. Every room has three view points (albeit windows or roof lanterns) which show the sky or the surrounding greenery.

The grand finale is the outdoor pool in a dry-stone walled garden.

The judges heaped praise on the "seamless" integration of its new angular structure with the existing house, which has also been restored.

"This geometric design skilfully fuses together the old with the new - connecting two architectures separated by over 300 years," said RIBA president Simon Allford.

It’s the second local building to scoop the top award, after The Outhouse on nearby Brockweir Common won five years ago.

Previously known as Windward House, the project has been a 10-year ’labour of love’ restoration, conversion and extension.

The architectural brief was to celebrate the house’s landscape setting and its views out over the Wye Valley, and the provision of display space for the owner’s extensive collection of Indian and African tribal art.

Consisting of continuous folded, planar elements, the extension is "intended to echo the landscape, its dark-coloured cladding designed to be recessive, its form low-lying, connected to the earth".

Inside niches, benches and recesses for the display of objects from the collection provide a different landscape.

The house also landed a special award for its sustainability and approach to conservation in the regional RIBA round.

Much of the surrounding land has been planted with wildflower meadows and orchards, alongside pollen-rich hedges and 2,500 trees.

To see ’The House on the Hill’ on Grand Designs, go to www.channel4.com