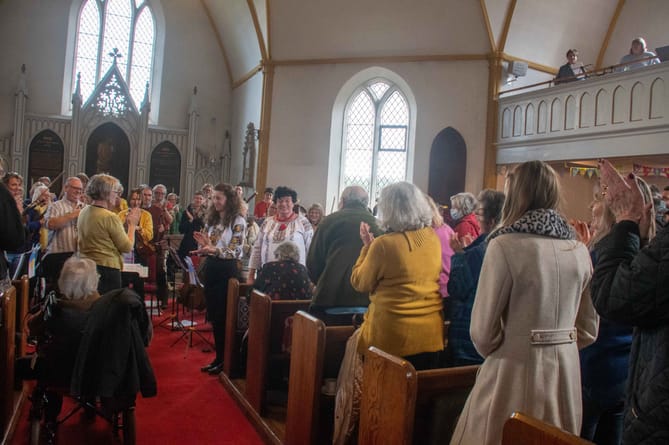 n A standing ovation for Ala and Nadia Postolotii at the end of the concert at Parkend Church on Sunday.

MORE THAN £10,000 has been raisedin a week from four events in the Forest to help people in Ukraine.

There have also been convoys of basic necessities such as toiletries going from the area to give more practical assistance to civilians affected by the Russian invasion.

Fund-raisers have been organised by the Forest of Dean Lions Club, the Royal Forest of Dean Orchestra and Forest Flute Choir, and Tidenham and Woolaston football club.

The Lions organised bucket collections outside Tesco which raised £5,087 and added £1,000 from its own funds.

A concert at St Paul’s Church in Parkend on Sunday by local orchestras raised around £4,000.

Tidenham and Woolaston football clubs spent the days before they played each other on Saturday collecting prizes for a raffle, raising £500.

A non-uniform day at the Dean Academy raised £600 – more on that story on page five.

A spokesman for the Forest of Dean Lions Club said “There are no administration costs involved and 100 per cent of the money will get to the people who need it in Ukraine.

‘‘Normally all our money goes to local good causes but we hope that the people of the Forest of Dean will understand that this is an exceptional situation. Information about the Lions can be found on our website and Facebook page.’’

The concert at Parkend featured a ‘scratch’ orchestra of musicians from both sides of the Wye – and special guests Nadia and Ala Postolatii, who are Ukrainian.

Alongside the Forest orchestra and flute choir were musicians from the Monmouth Concert Orchestra and Abergavenny Symphony Orchestra.

Organiser Fiona Crawley said: “It is the power of music bringing people together.”

Nadia said: “We really appreciate what the British do for Ukrainians.

‘‘We are praying for it to end. We know the truth is on our side. We firmly believe we will win, it’s just a question of time.”

More than 40 prizes were raffled at The Netherend Inn in Woolaston as a result of the efforts by Tidenham and Woolaston football clubs.

Haydn Bynon, of Tidenham FC, said they hoped other clubs would follow their example.

He said: ““We were hoping to raise £100 from each club but people have been really generous and we’ve raised far more.

“There are still a few weeks left in the season so we are hoping other clubs will do what we did and organise fund-raisers of their own.

“We only had a few days so it shows what can be done.”